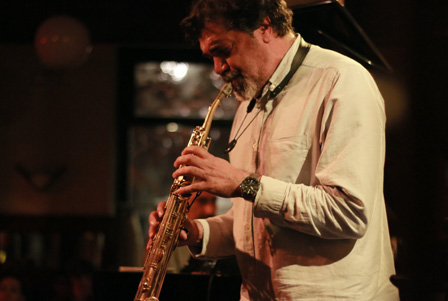 Musician, producer, sound engineer and composer. He is one of the leading musicians in the Canary Islands, specifically in Tenerife, the beautiful land where he was born.

As a musician and after living for a few years and for several times in Spain, Kike Perdomo has toured the jazz club and festival scene, back in the 90 years with Madera, Decoy Quintet, Big Band del Foro, performing many times in the Café Central, Madrid, and jazz festivals such as Jaén “Entre Olivos”, Lugo International Jazz Festival, Barcelona Jazz Festival, Málaga International Jazz Festival, Jimmy Glass in Valencia, Bogui Jazz and Café Berlin in Madrid, Filloa in La Coruña, Bilbaina Jazz Club in Bilbao, Jamboree and Luz de Gas in Barcelona, etc., in addition to touring the rock circuits with singers such as Luz Casal, Miguel Ríos and Joaquín Sabina, traveling throughout Spain and many Latin American countries.

He has been a producer for JC Machado, Chiqui P., Esther Ovejero, Taburiente, and he has  recorded about one hundred CDs as a collaborating musician.

In 2008 he created and began to lead the Canarias Jazz Showroom to support jazz made by Canarian authors and performers. This festival runs its 11th edition.

He is also President of the “Professional Association of Musicians of the Canary Islands”- PROMUSIC- since 2010 with which he performs many concerts, workshops, master classes, etc.

He is also Adviser of the Society of Artists of Spain AIE based in Madrid and Vice President of the Federation of Associated Musicians of Spain FEMA.