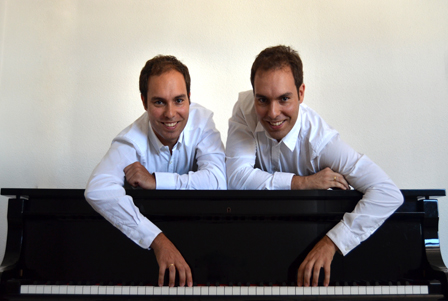 Oliver & José María Curbelo are brothers and twins and form a vibrant piano duo, whose performances have appeared on the most important canarian newspapers front pages and on Spanish TV News Channel. Twenty-two years of such labour and over one hundred concert performances is the measure of the Duo Curbelo career to date. The public and review have been quick to recognise their value, their precise technical ensemble, their virtuosity, great rhythmic feeling and a huge colorful palette in their performing.

They were born in Las Palmas de Gran Canaria (Canary Islands) in 1980. They began their piano studies at age 7 and got their music degrees in piano, chamber music and accompaniment at the Conservatorio Superior de Música at 18. Then they went on to study with the hungarian professor Ferenc Rados at Alcalá de Henares University (1999). After that they moved to Barcelona to complete their Master in Spanish Music for piano solo and piano duo as students of Alicia de Larrocha and Carlota Garriga at the prestigious Marshall Academy (Barcelona).

The twin brothers have performed an extensive repertoire for piano duo. In addition to the spanish music and traditional repertoire they perform works by alive canarian and catalan composers, such as A. Guinovart, A. García Abril, C. Garriga, R. Ashkenar, C. Díaz Pestano, M. Bonino, etc., with whom they work directly.

They placed first in the CajaCanarias Chamber Music Competition and have also won awards at another piano duo and piano solo competitions, including the International Piano Competition “Ciutat de Carlet”, the Premi de Música “Ciutat de Manresa” and somes competitions in Gran Canaria.

The Duo Curbelo has played as soloist with Gran Canaria Philharmonic Orchestra performing the Concerto in D minor for two pianos and orchestra by Poulenc and The Carnival of the Animals by Saint Saëns, conducted by Gloria Isabel Ramos and Rafael Sánchez Araña, respectively.

They have released two piano duo CDs for Klassicat and SEdeM and recorded the work “Ensayo a Dos”, for two pianos by Garriga for Columna Música. Their performances have been broadcast on Spanish and Argentinian radio and T.V. What’s more some TV chat shows have chosen their performances for several advertising campaign (“Panorama Canario” in 1992, “Claves” in 2003 and 2004).

In addition, they have taught at Conservatorio Superior de Música de Canarias since 2003 and have given piano duo masterclasses at Higher musical institutions in Utrecht, Como and Trieste. This activity is combined with research by publishing their studies in scientific research journals and conferences in Europe and America.