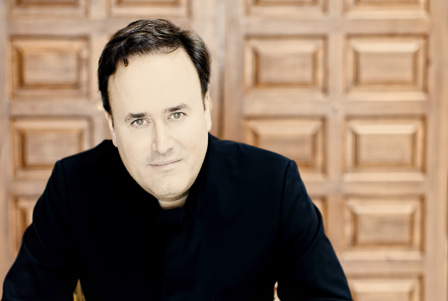 The british conductor Karel Mark Chichon continues delighting audiences around the world with his temperament, passion and musicality. In recognition of his services to music, Queen Elizabeth II of England made him an (OBE) Officer of the Order of the British Empire in June 2012. In 2016, he was elected a Fellow of the Royal Academy of Music in recognition of his work in the profession.Born in London in 1971, Chichon comes from Gibraltar. He studied at the Royal Academy of Music in the british capital and was Assistant conductor to Giuseppe Sinopoli and Valery Gergiev.

In May 2017 he was appointed Artistic Director and Head of the Gran Canaria Philharmonic Orchestra, a position in which he has been renewed until 2023.

From 2011 to 2017 he was Principal Conductor of the Deutsche Radio Philharmonie Saarbrücken Kaiserslautern, where he was acclaimed for his profound interpretations of a wide repertoire and his innovative work with the orchestra. Testimony to his work with the DRP is the success of his first three volumes of the complete orchestral works by Dvorák that he recorded for Hänssler Classics. In this regard, the critics highlight that "Karel Mark Chichon stands considerably above some of its most distinguished competitors" and hails these first three volumes as "the best versions available".

He regularly conducts on stages such as the Philharmonie in Berlin, Musikverein and Konzerthaus in Vienna, Concertgebouw in Amsterdam, Royal Festival Hall in London, Théâtre des Champs-Élysées in Paris, Philharmonie in Munich, Laeiszhalle in Hamburg, Alter Oper in Frankfurt, Great Hall of the Moscow Conservatory, National Music Auditorium in Madrid and Seoul Arts Center in South Korea.

In 2016 he made an acclaimed debut at the Metropolitan Opera in New York with Madama Butterfly, broadcast live in HD to 2,000 theaters in 66 countries. He recently conducted at the Metropolitan Opera La Traviata and will return in 2022 to conduct Rigoletto, thus becoming part of the exclusive core of conductors who return regularly to the revered North American Coliseum.

From 2006 to 2010 he was Musical Director of the concerts "Christmas in Vienna" held at the Konzerthaus and broadcast on television to millions of people.

He is also a regular artist for the prestigious Deutsche Grammophon label, for which he has recorded three discs and a DVD.