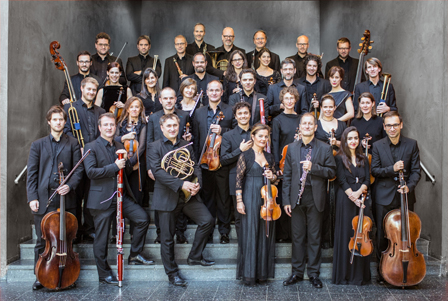 The Basel Chamber Orchestra is recognized as one of the leading chamber orchestras in the classical music scene.

Various award-winning recordings on classical labels like Sony, Deutsche Harmonia Mundi or Warner classics are witnesses to the excellent quality of the musical ensemble. The artistically independent ensemble is always searching for new and far-reaching ways of interpretation through constant development of its harmonious sound on both historical and modern instruments. The Basel Chamber Orchestra works with artists such as Sol Gabetta, Nuria Rial, Christoph Prégardien, and René Jacobs.

The association of principal guest conductor, Giovanni Antonini with the ensemble makes for a fruitful collaboration. For their historically informed interpretations, they were awarded the ECHO Klassik in the category for Best Ensemble in 2008 and became the first orchestra awarded with a Schweizer Musikpreis.

The Basel Chamber Orchestra alternating with the Italian Ensemble Il Giardino Armonico will perform and record for CD, under the baton of Antonini, all of Haydn’s 107 symphonies up until the year 2032. Further major projects will be concerts and recordings of all Schubert symphonies under the leadership of Heinz Holliger

Clariant International Ltd. has been the main sponsor of the Basel Chamber Orchestra since January 2013.