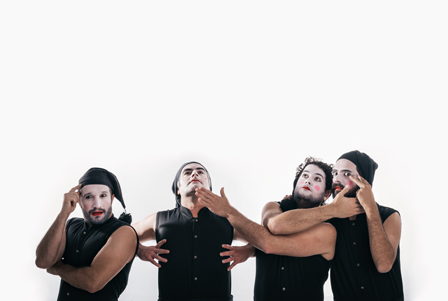 << Abubukaka is one of the most mediatic and well-known companies in the Canary Islands Community. Each season has two active pieces with which it represents an average of 70 performances each year and with more than 25,000 viewers per season. >>

Abubukaka was born as a theater quartet dedicated to humour on November 23, 2006, with the Café-Teatro show “La Peluca Saltarina”. Due to the good reception of the format, which ranged from absurd sketches to political satires - going through the most delusional surrealism and the use of verse - the company decided to bring a defined aesthetic to that kind of shows and began a more than prolific production, with one premiere a month over several seasons.

During the first year Abubukaka forged its own language and consolidated its status as a theatrical company, so much so that, supported by Canarias Cultura en Red, as well as by the Guimerá Theater, they tackled the assembly of their first large-format play: "Píaton" , written, directed and produced by the members of Abubukaka. With this show Abubukaka took part in the 2007/08 season of the Guimerá Theater's resident companies program, premiering it in the theater's square. They also attended various festivals such as the Mueca del Puerto de la Cruz, the Villa de Arucas, the Castilla y León International Arts Fair or representing the Canary Islands at La Fira Tàrrega de Teatre al Carrer in Catalonia, one of the most prestigious international street theater festivals.

In 2009 they were in charge of presenting the International Clownbaret Festival in its fourth edition, a commission that has been repeated every year to date. In 2013 they launched the successful production of “El Enfermo Imaginario” together with the Delirium Teatro company, with which they attended the Cáceres Classical Theater Festival and the Classical Theater Festival of Almagro.

In May 2014 they premiered the street show “Roscachapa” within the Mueca festival program, being a thunderous success that the more than 5,000 spectators who came to enjoy it can attest to, and in October of the same year, they premiered “La Familia Traditional ”, which is well received by critics and the public.

In 2015, they again premiered a show at the Mueca festival, in this case “Yupiyei”, surpassing in reception and attendance the already overwhelming participation of the previous year.

In May 2017 they released Cuneta Deluxe en Mueca for the fifth time in a row, continuing the fruitful relationship between Abubukaka and the festival, and in October of the same year they released Dracula, having a magnificent reception by the public.

In September 2019, Abubukaka brings a new premiere to the Guimerá Theater: La Cama. A work that reflects on migration and the sense of belonging.

In 2020, and despite the situation experienced during this year, they produce a new premiere, Uranio Impoverished, at the MUECA International Festival, where they talk about current affairs, denialism, First Date, monarchy and wigs.