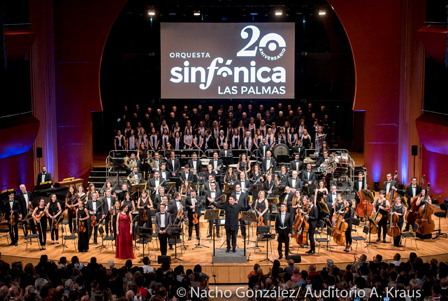 With more than 18 years of experience in concert management, the Las Palmas Symphony Orchestra always offers the highest quality in its concerts, always betting on local talent, counting among its musicians with professionals of national and international experience. Among its many projects, the popular New Year's Concert has become an unavoidable annual event selling out all locations and repeating up to 3 functions at the Alfredo Kraus Auditorium. One aspect to highlight in this project is the production of a participating choir with about 100 members that make the concert itself much more spectacular and closer. The Las Palmas Symphony Orchestra has a grant from the Ministry of Culture and Historical Heritage of the Gran Canaria Government (Cabildo) and is also a non-profit organization that fights for the recognition and rights of musicians in the Canary Islands. Since last March 2017, it has become a resident orchestra of the Teatro Cruce de Culturas at Cruce de Arinaga (Agüimes- Gran Canaria) and has appointed Mr. Rafael Sánchez Araña as principal conductor.