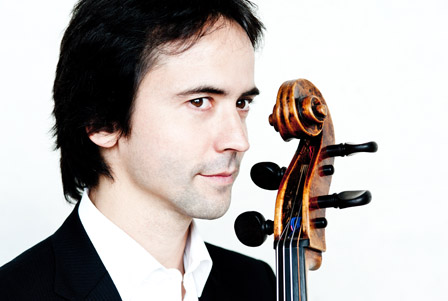 Curiosity, diversity and a firm focus on the music itself characterize the artistic work of Jean-Guihen Queyras. Whether on stage or on record, one experiences an artist dedicated completely and passionately to the music, whose humble and quite unpretentious treatment of the score reflects its clear, undistorted essence. The inner motivations of composer, performer and audience must all be in tune with one another in order to bring about an outstanding concert experience: Jean-Guihen Queyras learnt this interpretative approach from Pierre Boulez, with whom he established a long artistic partnership. This philosophy, alongside a flawless technique and a clear, engaging tone, also shapes Jean-Guihen Queyras’ approach to every performance and his absolute commitment to the music itself.

His approaches to early music – as in his collaborations with the Freiburg Baroque Orchestra, the Akademie für Alte Musik Berlin and the Concerto Köln – and to contemporary music are equally thorough. He has given world premieres of works by, among others, Ivan Fedele, Gilbert Amy, Bruno Mantovani, Michael Jarrell, Johannes-Maria Staud and Thomas Larcher. Conducted by the composer, he recorded Peter Eötvös’ Cello Concerto to mark his 70th birthday in November 2014.

Jean-Guihen Queyras was a founding member of the Arcanto Quartet and forms a celebrated trio with Isabelle Faust and Alexander Melnikov; the latter is, alongside Alexandre Tharaud, a regular accompanist. He has also collaborated with zarb specialists Bijan and Keyvan Chemirani on a Mediterranean programme.

The versatility in his music-making has led to many concert halls, festivals and orchestras inviting Jean-Guihen to be Artist in Residence, including the Concertgebouw Amsterdam and the Festival d’Aix-en-Provence, Vredenburg Utrecht, De Bijloke Ghent and Wigmore Hall London.

Jean-Guihen Queyras often appears with renowned orchestras such as the Philadelphia Orchestra, the Symphonieorchester des Bayerischen Rundfunks, Mahler Chamber Orchestra, the Orchestre de Paris, London Symphony Orchestra, the Gewandhausorchester and the Tonhalle Orchestra Zurich, working with conductors such as Iván Fischer, Philippe Herreweghe, Yannick Nézet-Séguin, François-Xavier Roth, Sir John Eliot Gardiner and Sir Roger Norrington.
Jean-Guihen Queyras’ discography is impressive. His recordings of cello concertos by Edward Elgar, Antonín Dvořák, Philippe Schoeller and Gilbert Amy have been released to critical acclaim. As part of a harmonia mundi project dedicated to Schumann, he has recorded the complete piano trios with Isabelle Faust and Alexander Melnikov and at the same time the Schumann cello concerto with the Freiburg Baroque Orchestra under Pablo Heras-Casado. The recording “THRACE - Sunday Morning Sessions“ explores, in collaboration with the Chemirani brothers and Sokratis Sinopoulos, the intersections of contemporary music, improvisation and Mediterranean traditions. In 2018, two highly acclaimed recordings with works by Carl Philipp Emanuel Bach and Antonio Vivaldi have been released.

Highlights in the 2018/19 season include a North American Tour, performances of “Mitten wir im Leben sind” with Anne Teresa de Keersmaeker and engagements with the Deutsches Symphonie-Orchester Berlin, the Atlas Ensemble, the Orchestra of the Eighteenth Century and Detroit Symphony Orchestra.

Jean-Guihen Queyras holds a professorship at the University of Music Freiburg and is Artistic Director of the “Rencontres Musicales de Haute-Provence” festival in Forcalquier. He plays a 1696 instrument by Gioffredo Cappa, made available to him by the Mécénat Musical Société Générale.

Jean Guihen Queyras in the 36. FIMC:

He will perform with the Danish Radio Symphony Orchestra in the following concerts: