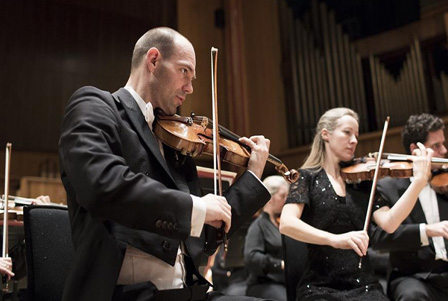 Founded in 1945, the Philharmonia is a world-class symphony orchestra for the 21st century. The Orchestra’s home is Southbank Centre’s Royal Festival Hall, in the heart of London, where the Philharmonia has been resident since 1995 and presents a season of around 50 performances each year. Under Principal Conductor & Artistic Advisor Esa-Pekka Salonen, the Philharmonia has created a series of critically-acclaimed, visionary projects, distinctive for both their artistic scope and supporting live and digital content.

The Philharmonia is resident orchestra at Bedford Corn Exchange, De Montfort Hall in Leicester, The Marlowe in Canterbury, The Anvil in Basingstoke, the Three Choirs Festival in the West of England, and Garsington Opera. At the heart of these residencies is an education programme that empowers people in every community to engage with, and participate in, orchestral music.

Internationally, the Philharmonia is active across Europe, Asia and the USA. In 2018/19, the Orchestra performs extensively in Europe and undertakes three major international tours, to China and South Korea (October 2018); to Cartagena in Colombia, in a joint digital installation-live concert tour (January 2019); and to the USA (March 2019).

The Philharmonia’s international reputation in part derives from its extraordinary recording legacy, which in the last 10 years has been built on by its pioneering work with digital technology, most recently blazing a trail for classical music in Virtual Reality.

The Philharmonia records and releases music across multiple channels and media. An app for iPad, The Orchestra, has sold tens of thousands of copies; Hollywood composers choose to record their scores for films, video games and television series with the Orchestra; the Philharmonia is Classic FM’s ‘Orchestra on Tour’ and broadcasts extensively on BBC Radio 3; with Signum Records the Philharmonia releases live recordings of signature concerts.