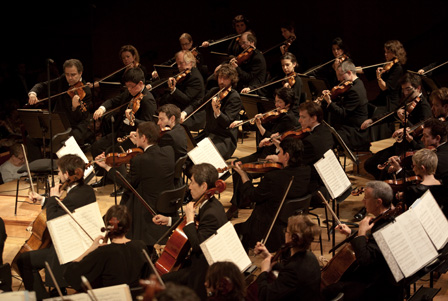 After many migrations in the course of its half-century of history, the Orchestra became Principal Resident of the Philharmonie de Paris when it opened in January 2015. It found this building designed by the architect Jean Nouvel a venue ideally suited to perpetuating its French tradition and tone colour. In January 2019, ithe Orchestra embarked on a new stage in its rich history by becoming an integral part of this cultural hub unparalleled anywhere in the world, as a specific department situated at the very core of the artistic project of the Philharmonie de Paris.

The Orchestre de Paris, France’s leading symphony orchestra, gives around a hundred concerts with its 119 musicians each season, at the Philharmonie de Paris or on international tours.

The Orchestra’s strategy places its activities in the direct line of descent from the French musical tradition, and therefore plays a key role in serving both the repertories of the nineteenth and twentieth centuries, and contemporary creation through the hosting of composers in residence, the premieres of numerous works and the presentation of cycles devoted to the tutelary figures of the twentieth century (Messiaen, Dutilleux, Boulez and others.).

Ever since its first American tour in 1968 with Charles Munch, the Orchestre de Paris has been a regular guest in the foremost musical venues and has forged close ties with European musical capitals, but also with Japanese, Korean and Chinese audiences.

Strengthened by its position at the heart of the artistic and educational facilities of the Philharmonie de Paris, the Orchestra more than ever views its work for young people as a top priority. Whether in the various spaces at the Philharmonie or outside its walls – in Paris or its suburbs – it offers a wide range of activities, open to schoolchildren or families as well as to citizens who are further removed from musical life and in situations of vulnerability.

In order to make the talent of its musicians available to as wide a public as possible, the Orchestra has diversified its audiovisual policy by building partnerships with Radio Classique, France Musique, Arte and Mezzo.

Paris Orchestra in the 36. FIMC: