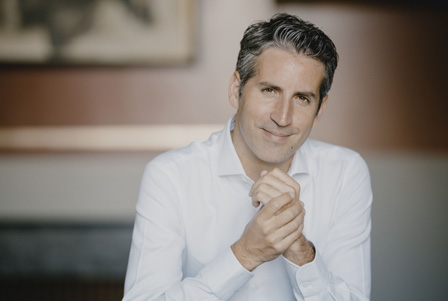 Lucas Macías recently announced as Principal Conductor of Oviedo Filarmonía.  He made his conducting debut at the Teatro Colón in Buenos Aires in 2014 following an exceptional career as one of the world’s leading oboists – a former principal of the Royal Concertgebouw Orchestra and founder member of Orchestra Mozart – together with the mentorship of Maestro Claudio Abbado - he has a deep knowledge and understanding of the chamber and symphonic repertoire.

As a regular conductor of Camerata RCO he will take them to the brand new Zaryadye Hall in Moscow in a programme featuring Berg’s Sieben Frühe Lieder and Mahler Symphony No.4 – together they have recorded the Mahler in the Erwin Stein version of which Het Parool wrote:

“It is a big treat to listen to the well-known piece in this fragile version in which each single voice is equally important, even though you need musicians of a very high level to make this adventure successful. In the hands of Camerata RCO, led by Lucas Macías Navarro, it is a breath-taking experience.”

Lucas Macías Navarro began his musical studies at the age of 9 years and later was accepted in Heinz Holliger's oboe class at the University in Freiburg im Breisgau, Germany. He continued his studies at the Karajan Academy of the Berlin Philharmonic Orchestra, and in Geneva with Maurice Bourgue. He won several competitions, among others, the Sony Music Foundation's "International Oboe Competition of Tokyo" in 2006. He has made many recordings with Maestro Abbado released on Deutsche Grammophon, Claves Music and Euroarts. He studied conducting at the Music University in Vienna with Mark Stringer.

Lucas Macías Navarro in the 36. FIMC:

He will conduct the Camerata RCO in the following concerts: