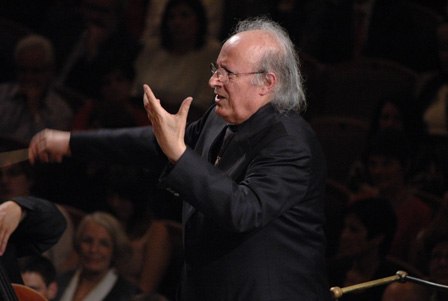 Born in Israel, Eliahu Inbal studied violin and composition at the Jerusalem Music Academy before completing his studies at the Conservatoire National Supérier in Paris upon the recommendation of Leonard Bernstein. His teachers there included Louis Fourestier (conducting), Olivier Messiaen, and Nadia Boulanger. His musical development was also heavily influenced by Franco Ferrara, in Hilversum, the Netherlands, and Sergiu Celibidache, in Siena, Italy. Since winning first prize in the Cantelli Conducting Competition at the age of 26, Eliahu Inbal has enjoyed an international career, conducting leading orchestras in Europe, the United States, Japan and Israel and making regular appearances at international festivals.

During his tenure with the hr-Sinfonieorchester Frankfurt (1974-1990), whose honorary conductor he remains today, Eliahu Inbal received international acclaim for his interpretations of Mahler and Bruckner through a number of award-winning recordings. He was also principal conductor of the Orchestra Nazionale della RAI in Turin from 1995 to 2001. For his preeminent interpretation of Wagner's Ring des Nibelungen, he was awarded the Italian critics' prize Premio Abbiati and the Premio Viotti. From 2001-2006, Eliahu Inbal was principal conductor of the Berlin Konzerthaus Orchestra, an orchestra which he had regularly conducted since 1992.

From 2007-2011, Eliahu Inbal was again appointed principal conductor of the Teatro La Fenice in Venice, a position he had previously held from 1984-1987. His operatic engagements have taken him to opera houses in Paris, Glyndebourne, Munich, Stuttgart, Hamburg, Zurich and Madrid among others.

Eliahu Inbal's extensive discography includes the complete symphonic works of Berlioz, Brahms, Bruckner, Mahler, Ravel, Schumann, Chopin, Schostakovich, Skriabin, Stravinsky, Richard Strauss, and the Second Vienna School. He recorded these works with the RSO Frankfurt as well as with the Philharmonia Orchestra London, the Orchestre National de France, the Vienna Symphony, the London Philharmonic, the Orchestre de la Suisse Romande, the Czech Philharmonic, the Tokyo Metropolitan Symphony Orchestra among other. Many of his recordings have been awarded prizes, such as the Deutscher Schallplattenpreis, the Grand Prix du Disque, the Prix Caecilia and the Symphony Prize of the 50th Record Academy Award, 2012 in Japan.

In 1990, the French government named Eliahu Inbal an officer of the Order of Arts and Letters. In February 2001 he was awarded the Golden Medal for Merit from the city of Vienna. He received the Goethe Badge of Honour from the City of Frankfurt and the Order of Merit from the Federal Republic of Germany in 2006.

He will conduct Gran Canaria Philharmonic Orchestra in the following concerts: