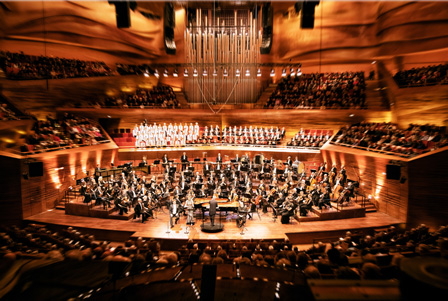 The Danish National Symphony Orchestra was founded in 1925 as part of the Danish Broadcasting Corporation. Today, it is one of the leading symphony orchestras in Europe performing with the world’s leading conductors and soloists.

The orchestra has toured extensively in the USA, in South America, in China and in most countries in Europe, and performed at some of the most prestigious venues including Carnegie Hall, Royal Albert Hall, Berlin Philharmonic, Cologne Philharmonic, Concertgebouw, Konzertverein (Vienna) and the BBC Proms.

The Danish National Symphony Orchestra performs everything from Classical works by Beethoven and Brahms through Roman­tic tone-poems and modern masterpieces to new creations by the com­posers of tomorrow. At the same time, the Orchestra has a special feeling for Danish music – from classics like Carl Nielsen and Niels W. Gade to the very young composing talents.

Each year more than 100,000 music-lovers experience the magic of live symphonic music with the Danish National Symphony Orchestra – both in the spectacular hall of DR Koncerthuset (designed by Jean Nouvel) and on the Orchestra’s annual tour abroad. In addition to the concert audiences, the Orchestra’s popular Thursday Concerts are enjoyed by many Danes on radio and TV, and millions tune in when the concerts are broadcast internationally.