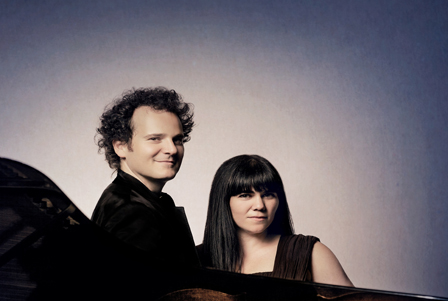 Dúo Cassadó started their artistic endeavour in the year 2000, since then they have been presented with numerous plaudits and have had praise heaped upon them from the public as well as critics alike.

Damián Martínez Marco, considered one of the best cellists of his generation, was recognized and recommended by Mstislav Rostropovich. They were also recommended by Alicia de Larrocha as the most brilliant duo, represents of the spanish chamber music.

Marta & Damian have performed in some of the most prestigious auditoriums all over the world from Europe to the Middle East, from America to Africa, and have managed to form a duo that has combined a talented cellist exuding warmth and finesse and a pianist of refined sensibility.

Warner Classics presented “Rapsodia del Sur” recorded by Dúo Cassadó with the support of the BBVA Foundation, a tribute to the great composer Gaspar Cassadó.

Damián Martínez Marco started to make a name for himself at a very early age, hence his recommendation by Mstislav Rostropovich to the Queen Sofía. He has won numerous international accolades, and is widely known for his “expressive sensibility” and “ornate tone”.

At the age of twenty, he became principal cello soloist for the Spanish Radio Television Orchestra and from 2001 to 2005 he joined the acclaimed Barcelona Symphony Orchestra OBC.

He is professor at Esmuc and Musikene. Damian has performed tours in France, Germany, England, United States of America, Finland, Sweden, Morocco, Lithuania, Estonia, Japan, Colombia, Ecuador, Israel and Canada. He has recorded for Warner Classics, Claves, Naxos and ASV. Damian plays a Jean Baptiste Vuillaume made in Paris in 1863.

Marta Moll de Alba is widely considered as one of the finest pianists of her generation.

Through her fledgling career she has already been able to garner much praise as well as picking up several awards along the way in Barcelona, Porto and Mannheim. In 2006 the “Sociedad Económica de Amigos del País” bestowed upon her the “Premio Gran Canaria” award. Under the tutelage of Alicia de Larrocha, Leontina Margulis, Cecilio Tieles, Margarita Guerra and Tibor Szász she was allowed to discover her own artistic vision and expression.

After graduating from university in Spain she then took the decision to nurture her development even more as an outstanding musician by moving to Germany on a scholarship from Alexander von Humboldt Stiftung, where she studied in Freiburg and in Cologne.

Marta has played in concert venues all over the world, from Europe to the Middle East, from America to Africa. Her piano repertoire is extensive and varied. She has recorded for MusikCat and for Warner Classics.

Audiences are regularly overawed by her magnetic stage presence and alluring performances. She teaches at Musikene.

Dúo Cassadó in the 36. FIMC