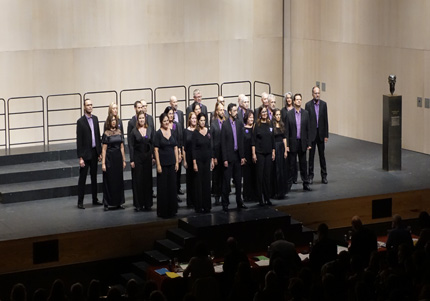 The Ainur Chamber Choir, which started its career with a line-up of just nine people, relaunched its activity with new momentum in 2006. Since then, the group has been growing up to the nearly thirty members that shape the choir today, a fact which allows this chamber choir to face extremely demanding repertoires.

This ability to undertake repertoires of great complexity, inherent to the very idiosyncrasy of this group, provides the members with further motivation in an endless cycle, a circumstance which accounts for the choir's constant growth in the latest years. National acknowledgment has come in many occasions, but especially in 2012 and 2018, when the Ainur Chamber Choir was awarded the National Grand Prix. In their assessments, the different juries have highlighted the elegance with which the choir faces each style, as well as its musicality and vocal quality.

The choir's repertoire is characterized by its variety and innovation. Also, it often integrates recent works by renowned composers of choral music, as well as by new composers from the Canary Islands.

The Ainur Chamber Choir´s list of triumphs is as brilliant as it can be. Apart from the two National Grand Prix awards mentioned above, it also got first prize in the contests of "Fira de Tots sants" in Alicante in  2014, "Certamen de la Canción Marinera de San Vicente de la Barquera" in Santander (both in its 2011 edition and in its special 50th edition in 2017), and "Antonio José" in Burgos in 2015 and 2018, just to mention some of  the many awards collected throughout the choir's relatively short career.

The choir's activity does not only adjust to performing choral music. It is also involved in the spreading of this kind of music with the organization of a choral music composition contest -which awards several prizes in different modalities and which takes place every two years-, as well as of an annual choral music festival, the Canary Choral Music Week , whose fourth edition will take place in November this year.

Throughout the years, the Ainur Chamber Choir has had the pleasure to collaborate with different guest conductors, such as  Elías Rodríguez, Ángel Camacho, Emilio Tabraue y Laura González Machín o Eligio Quinteiro, in order to undertake different works in its repertoire.

Mariola Rodríguez Suárez has been the choir's conductor ever since its foundation. She studied piano and singing at the Professional Music Conservatory of Las Palmas de Gran Canaria, and she also got her degree in Music History from the University of Salamanca. She has a vast choral experience and has been a member of many groups both from and outside the Canary Islands. She has worked as assistant to numerous choir conductors such as Laura González Machín, Juan José Falcón Sanabria, Emilio Tabraue El Jaber and Dante Andreo. She specialised in Early Music under the guidance of Isabel Álvarez.

Apart from her activity with the Ainur Chamber Choir, she has developed different workshops in choral festivals, and she has also been a member of the jury in national choir contests. She is the art director at the Canary Choral Music Week.

Ainur Chamber Choir in the 36. FIMC:

The Choir will sing works 'a capella' in the first part, followed by Fauré's Requiem in the second part  with musicians of Las Palmas Symphony Orchestra, conducted by Mto. José Brito in the following islands and dates: