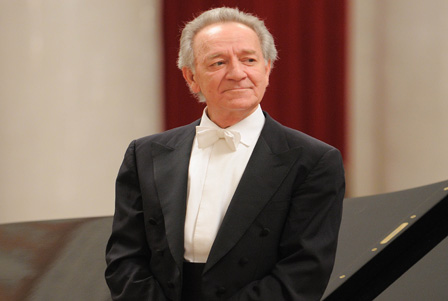 Acknowledged master of the conductor's art, Yuri Temirkanov has been the Artistic Director of the St Petersburg Philharmonic, as well as its Principal Conductor since 1988.

"Yuri Temirkanov’s conducting is like a magical immersion into a world that would have been lost to us, if not for the great conductor, one of the last giants of the last century" (Le Monde, 2012). Among the artist's engagements this year alone include conducting the Chicago and the Baltimore Symphony Orchestras, concerts with the orchestras of Santa Cecilia Academy, the London Philharmonic and Teatro La Fenice.

World-renowned orchestras have invited the musician to partner with them for more than three decades. During the years from 1979-1998 Temirkanov worked with the London Royal Philharmonic Orchestra, first as Chief Guest Conductor, and since 1992 - as the Principal Conductor. Maestro also led the Baltimore Symphony Orchestra (2000-2006), was the Chief Guest Conductor of the Dresden Philharmonic Orchestra (1992-1997) and the Danish Radio Symphony Orchestra (1998-2008).

But, according to Temirkanov, his home has always been and remains - St Petersburg, where the artist began his ascent to the Olympic heights of the conductors’ art. In 1967, as post-graduate of the Leningrad Conservatory (class I. Musin) in the status of the winner of the All-Union Conductors' Competition, he performed in the Grand Hall of the Philharmonic for the first time. A year later, the 29-year-old musician stood behind the podium of his own orchestra – the Leningrad Philharmonic Symphony Orchestra (now the St Petersburg Symphony Orchestra). Working together strengthened the reputation of both the conductor and the orchestra and they went on to perform at the Concertgebouw in Amsterdam and New York's Carnegie Hall.

Temirkanov's name is associated with the beginning of the revival of the Mariinsky (Kirov) Theater. During the years from 1976-1988, the musician was its Artistic Director and Principal Conductor. During this time, the repertoire included performances of such masterpieces as "Eugene Onegin" (even today, they are performed as directed by Temirkanov) and "The Queen of Spades" by Tchaikovsky, "War and Peace" by Prokofiev, "Peter I" by Petrov and "Dead Souls" by Shchedrin. The troupe began actively touring (USA, Japan, Europe) and symphonic concerts by the theater orchestra were again put into practice, including abroad.

"The most important thing in my orchestra (at least I hope so) - is that the musicians come to me to work not just for the money. They come to serve this cause," - maestro devoted these words to the Honored Ensemble of Russia. More than a quarter century has passed since the beginning of their creative collaboration. These were years, enriched by concerts in many countries of the world, and at the most famous venues. Among them, New York’s Carnegie Hall (where, in 2005, the orchestra was the first Russian orchestra to open the concert season), the Suntory Hall in Tokyo, Theatre des Champs Elysees in Paris and London's Barbican Hall, the Berlin Philharmonic, La Scala in Milan, Musikverein in Vienna and Amsterdam’s Concertgebouw. The foreign press does not skimp on epithets. "This orchestra – is the national treasure of Russia, and conductor, Yuri Temirkanov – is one of the best in the world" (The Washington Post, 2014).

"That night in the [Roman] Auditorium it seemed some kind of magic occurred... Temirkanov’s talent and the virtuosity of the musicians transcended the notes recorded on note staff..." (Corriere de la sera, 2014). "The climax of the evening was the performance of Tchaikowsky’s Symphony - "Pathetique". It is hardly possible to surpass Maestro Temirkanov’s interpretation of this symphonic romantic masterpiece." (El Mundo, 2015). "He has once again demonstrated that none of the orchestras, performing Russian music can be compared with his musicians." (Opera World, 2015). "Hearing the St Petersburg Philharmonic Orchestra performing a Russian repertoire is always a special pleasure, and the orchestra’s first night performance on the BBC Proms, conducted by Yuri Temirkanov, was above criticism. If the sign of a great interpretation is the ability to present us with a familiar work as if for the first time, both works - Rachmaninoff's Second Piano Concerto and "Scheherazade" by Rimsky-Korsakov - were brilliant " (The Guardian, 2015). "In Dzintaru, Temirkanov delivered to each of the more than two million listeners each bar of the great and, seemingly long familiar to all, Tchaikowsky’s music [excerpts of music from the ballet "The Nutcracker "]" (LSM, 2016).

"Our every performance throughout the world - is our presentation of our Russian culture. Always." (Yuri Temirkanov).

Of course, regular performances are held in the musicians’ "home" - the Grand Hall of the St Petersburg Philharmonic. Here, this season the music of Brahms will be played under the baton of Maestro, as well as Bruckner, Ravel, Respighi, Bizet, Shchedrin, Tchaikovsky, Rachmaninoff, Stravinsky, Prokofiev, Shostakovich and Khachaturian.

"Ask me why I postponed everything and came to the Yuri Temirkanov Concert today, - is the same as asking a woman why she gives birth to a child. This is my need, an urgent need to listen to music in a great performance." (A. Dzhigarkhanyan). A musician's creativity is recognized not only by the public and critics (Italians, in particular, in the 2000’s, twice honored him with the prestigious Abbiati Award in the category "Best Conductor"). People's Artist of USSR, laureate of the State Prize and the President of Russia Prize, the holder of the Order "For Services to the Fatherland", Commander of the Order of Star of Italy, an honorary member of the Academy of Santa Cecilia, an Honorary Doctor of the St. Petersburg Conservatory, honorary citizen of St. Petersburg – all this is not a complete list of Temirkanov’s regalia.

In 2015, the following were added to this list - the Teatro La Fenice Foundation Award "Life in Music" and the Japanese title of Knight of the Order of the Rising Sun. In November 2015, Yuri Temirkanov was appointed the first-ever Honorary Life Conductor of the orchestra and choir of the National Academy of Santa Cecilia (Rome).

"I love Yuri Hatuevich not only as a great musician, but also as an interesting, multi-faceted man, an aristocrat both in music and in life. Just being in his company – is happiness." (O.Rostropovich). The conductor’s life is not just confined to the concert stage. Among Maestro Temirkanov’s International Fund for Cultural Initiatives projects are – the E. Kolobov Prize Foundation, which was established for musicians of the Moscow "New Opera" theater, scholarships for students of the St Petersburg Conservatory and students of the Central Special Music School. For more than fifteen years, the conductor has directed the "Arts Square" festival, which, along with the St Petersburg Philharmonic involves the Mikhailovsky Theatre, the Musical Comedy Theatre and the Russian Museum. Unique in its concept, the festival gathers artists of the highest caliber in our city, confirming the status of St Petersburg as one of the cultural capitals of Europe.