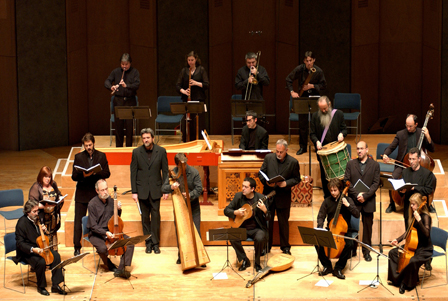 Following the model of the famous Medieval “royal chapels” for which the great masterpieces of both religious and secular music were composed on the Iberian Peninsula, in 1987 Montserrat Figueras and Jordi Savall founded La Capella Reial, one of the first vocal groups devoted to the performance of Golden Age music on historical principles and consisting exclusively of Hispanic and Latin voices. In 1990, when the ensemble received the regular patronage of the Generalitat of Catalonia, it changed its name to La Capella Reial de Catalunya.

The newly-formed ensemble specialized in the recovery and performance on historical principles of the polyphonic and vocal musice of Spain and Europe from the Middle Ages and Golden Age up to the 19th century. La Capella Reial de Catalunya shares with Hespèrion XXI the same artistic outlook and goals, rooted in respect for the profoundly spiritual and artistic dimension of each work, combining quality and authenticity regarding the style of the period with a careful attention to the declamation and expressive projection of the poetic text.

The ensemble’s extensive repertory ranges from the Medieval music of the various cultures of the Mediterranean to the great masters of the Renaissance and the Baroque. The group has distinguished itself in various Baroque and Classical opera repertories, as well as in contemporary works by Arvo Pärt. The Capella Reial de Catalunya played on de Jacques Rivette’s soundtrack of the film Jeanne La Pucelle (1993) on the life of Joan of Arc.

In 1992, La Capella Reial de Catalunya made their opera debut accompanying all the performances of Le Concert des Nations. They have received various awards and distinctions in recognition of their more than 40 CDs. Under the direction of Jordi Savall, La Capella Reial de Catalunya pursue an intense programme of concerts and recordings all over the world, and since the ensemble’s creation it has regularly performed at the major international early music festivals.