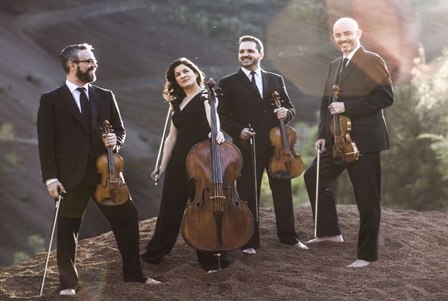 Quiroga Quartet has become a number one in chamber music in Spain for the new generation of performers. They are a reference for those who have developed their careers in the 21st century, they work in perfect consensus, take care of their record releases - six At the moment, they offer concerts in various formats and have consolidated their name internationally in the usual venues for them, such as the Wigmore Hall in London, the Philharmonie in Berlin, the Frick Collection and the Lincoln Center in New York, the Invalides in Paris, the National Auditorium of Madrid or the German Heidelberger Frühling, etc. For two seasons they were in charge of sounding the Stradivarius collection of the Royal Palace, they combine teaching with performance and have marked a possible path for the new generations."El País

Cuarteto Quiroga, appointed quartet-in-residence in charge of the Royal Collection of decorated Stradivarius at Madrid’s Royal Palace, has established itself as one of the most dynamic and unique quartets of its generation, winning international acclaim from critics and audiences alike for its distinctive personality as well as its bold and original approach to the string quartet repertoire.
The quartet honours the memory of galician violinist Manuel Quiroga, one of the most outstanding instrumentalist of spanish music history.

Strongly committed to chamber music teaching, they hold the String Quartet Chair at Zaragoza’s Conservatorio Superior (CSMA), and they are regularly invited to give masterclasses at universities and music conservatories throughout Europe, USA and Latin America.

Their CD-albums “Statements” and “(R)evolutions” (COBRA), have been acclaimed by the international press and awarded several prizes and distinctions. “Statements”, with music of Haydn, Webern and Sollima won the “CD of the year 2012 Award”, given by the Independent Producers Union (UFI). “(R)evolutions”, dedicated to the early music of Schönberg, Webern and Alban Berg, was awarded, among several other distinctions, with the label “Exceptional CD” given by Scherzo, Spain’s leading music magazine. They have recently released two new CD titles: “Frei Aber Einsam”, dedicated to the Opus 51 quartets by Johannes Brahms (Cobra) and a collaboration with pianist Javier Perianes including the piano quintets of Granados and Turina (Harmonia Mundi). Both recordings have already been praised by such prestigious reviewers as The Strad, Gramophone, BBC Music Magazine (UK), Luister (NL), El País (Spain) and have already received awards and recognitions from several magazines (Scherzo, Pizzicato, Ritmo, Melómano, ICMA, etc.) and broadcasting corporations, such as the Norddeutscher Rundfunk, NDR.

Cuarteto Quiroga has its official residence throughout the year at Madrid’s Cerralbo Museum. Mr.Sierra would like to thank Paola Modiano’s heirs for the generous opportunity to play the 1682 Nicola Amati violin “Arnold Rosé”.