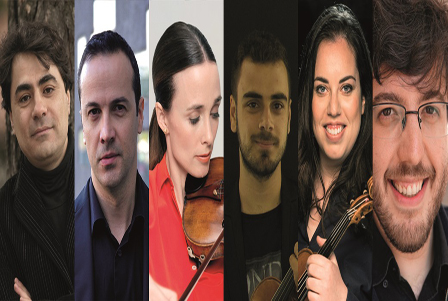 Quantum Ensemble is the resident ensemble of the Auditorium de Tenerife Adán Martín for five seasons. It is a flexible and collaborative formation founded by three canarian musicians with extensive and renowned career paths at national and international level: David Ballesteros (violin), Cristo Barrios (clarinet) and Gustavo Díaz-Jerez (piano).

The group is committed to a modern way of approaching the interpretation of classical music, more flexible, in a closer way. His programs, always creative and surprising, often combine music with other artistic disciplines, such as dance, free improvisation, poetry or visual art. They also do important social work through actions with disadvantaged groups, master classes, workshops and presentations.

Frederieke Saeijs: Dutch violinist. She gained international recognition by winning the prestigious International Long-Thibaud violin Competition in Paris in 2005, starting a concert career around the world. His recent recording of the solo violin sonatas by Ysaÿe (Linn Records) was described by Gramophone as: "The one by Saeijs is a memorable performance, it subtly handles character changes without compromising the beauty of sound". Frederieke plays on the only violin Ex-Reine Elisabeth by Pietro Guarneri (Venice, 1725), thanks to the Dutch National Foundation for Musical Instruments.

Pablo Díaz: He studied at the Reina Sofía School of Music with the violinist Marco Rizzi. He won the third prize in the XI Intercentros-Melómano Competition. He is a member of the Trío Ramales, with which he has played on the most important stages in Spain and won several national and international competitions. As a composer, he is currently studying with Professor David del Puerto. His Trio for violin, cello and piano was premiered by the Trío Ramales at the Sierra Musical Festival of Madrid. In 2017 he premiered his Sonata for saxophone and piano at the Composition Festival of Tres Cantos. In 2018 he premiered his Trio for violin, cello and piano nº 2 in the CajaCanarias Chamber Music Contest). His work Tres Miniaturas for flute and piano was rebroadcasted by RNE.

Cristo Barrios: In concert they highlighted their performances at Carnegie Hall (New York), Wigmore Hall and Cadogan Hall (London), Palau de la Música (Barcelona and Valencia), Konzerthaus (Vienna and Berlin), Concertgebouw (Amsterdam) and National Auditorium  (Madrid). As a chamber musician he shared the stage with the Brodsky, Arditti, Endellion, Elias and Minetti quartets. As a concert performer, he made his debut with the Mariinsky Symphony Orchestra (Valery Gergiev). He worked with the composers Einojuhani Rautavaara, Helmut Lachenmann, Kaija Saariaho and Esa-Pekka Salonen. He taught master classes at the Amsterdam Conservatory, Sibelius Academy (Helsinki), Liszt Academy (Budapest), University of Arts (Zürich), Strasbourg Conservatory, Norwegian Academy of Music and Cologne Conservatory. He is currently a doctor in performative musicology (Universidad Complutense), honorary associate of the Royal Academy of Music (London) and professor at the Katarina Gurska Higher Center (Madrid).

Gustavo Díaz-Jerez: Gustavo Díaz-Jerez is one of the greatest exponents of the interpretation and musical creation in Spain. He has performed at Carnegie Hall, Allice Tully Hall, Musikverein, Concertgebouw, etc. In addition, as a soloist he has been directed by Skrowaczevski, Fischer, Bamert, Lü Jia, Herbig, Encinar and Víctor Pablo with most of the leading Spanish orchestras, such as the Philharmonic Orchestra of Gran Canaria, the Tenerife Symphony Orchestra, the Orchestra of the RTVE, the Symphonic Orchestra of Galicia, etc., and with foreign formations such as the Budapest Festival Orchestra, the Turin Symphony, the Northern Symphonia, the Berliner Simphoniker, etc. He is currently professor of Musikene (Basque Country), doctor of musical arts (Manhattan School of Music) and permanent academic of the Real Academia Canaria San Miguel Arcángel.

Cecilia Bércovich: She is a versatile violin and viola player, finishing her postgraduate and graduate studies with Honors in both instruments. He is currently part of the Trío Arbós (National Music Award 2013). In addition, she delves into the composition and conducting. Enthusiast of the creation in our time, Cecilia orders and releases works frequently. He has performed under the baton of Pierre Boulez, Krysztof Penderecki, Peter Eötvös and Matthias Pintscher, among others. Arranger and improviser, her scores have been performed in Europe, Africa and Canada. She is also a professor at the Katarina Gurska Higher Music Center in Madrid.

Iván Siso: He was born in La Coruña in 1989 and completed his violoncello training with the teachers Xulia Nogueira, Barbara Switalska, Maria Casado, Asier Polo and Enrico Dindo. From his participation, from a very young age, in orchestral and chamber music projects, his current interest derive from all kinds of musical activity related to his instrument. In pedagogy, as professor of cello and chamber music at the School of Music and Performing Arts Alfonso X el Sabio. As a chamber musician, as a collaborator in groups such as Spira Mirabilis or Extreme Sound, and also in orchestras like the ONE, the ORTVE, the RFG or the Orchestra della radio della Svizzera Italiana (OSI). He also highlights his activity as a main violoncello with the Euskadi Symphony Orchestra (OSE) and the Galicia Symphony Orchestra (OSG).