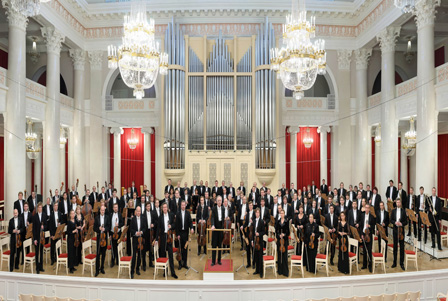 According to foreign critics, the history of the St. Petersburg Philharmonic Orchestra - "part of the world elite and, no doubt, historically the most important of the Russian orchestras" - began with the decree of Alexander III dated 16 July 1882, which initiated the creation of the Court Choir. Transformed into the Court Orchestra at the beginning of the XX century, for the first time in Russia, the orchestra performed the symphonic poems "The Life of a Hero" and "Thus Spake Zarathustra" by Richard Strauss, Mahler's First Symphony and Bruckner's Ninth Symphony, Scriabin's "Poem of Ecstasy" and Stravinsky’s First Symphony. A.Nikish and R.Strauss conducted the orchestra as well as A.Glazunov, who dedicated the "Festival Overture" to the orchestra. In 1917, the Court Orchestra became the State Orchestra, and was headed by S.Koussevitzky.

In 1921, the orchestra, given the hall of the former Noble Assembly at its disposal, opened the country's first Philharmonic. The unprecedented in scale activities of the orchestra drew a new and sometimes far removed from classical music audience to its Grand Hall. Outstanding Russian musicians underwent a rigorous test of their conducting skills with the orchestra. Such legendary Western conductors as B.Walter, F.Weingartner, G.Abendroth, O.Fried, E.Kleiber, P.Monteux and O.Klemperer; soloists V.Horowitz and S.Prokofiev, performed with the orchestra. The orchestra mastered a vast contemporary repertoire. In 1918, it presented the premiere of Prokofiev’s "Classical Symphony", and in 1926 – Shostakovich’s First Symphony.

In 1934, the orchestra - the first in the country - was awarded the title “Honored Collective of the Republic." 1938 ushered in a half-century of the "Age of Mravinsky" - years of hard work, which earned the orchestra a place among the most prominent orchestras of the world. In 1946, the orchestra embarked on its first foreign trip – and gave the first overseas performance in the country’s symphonic performance history. This was followed by regular tours around the world, performing at the most prestigious European festivals. A unique and creative alliance formed between D.Shostakovich and E.Mravinsky, to whom the composer devoted the Eighth Symphony. The conductor and the orchestra performed five Shostakovich's symphonies for the first time.

Since 1988, Yuri Temirkanov has headed the orchestra. Every year, the fruits of the collaboration of these musicians have received rave press reviews. "Who says that Russian orchestras are not the same anymore? The St. Petersburg Philharmonic Orchestra with its Russian program ... gave one of the most mind-blowing concerts held in Scotland for many years, including at the Edinburgh Festival” (The Scotsman, 2014). "It was a very ordinary Thursday evening in Vienna's Musikverein. Or was it? .... How to describe the thrill caused by every chord of Shostakovich’s incredible Fifth Symphony, played by inspired guest performers? ” (Wiener Zeitung, 2015). "If the first evening of the St. Petersburg Philharmonic Orchestra at the BBC Proms was unique, the second, also conducted by Yuri Temirkanov, became a celebration of characteristically Russian sound...” (The Guardian, 2015). "... We have heard it’s wonderful performance [Shostakovich's Seventh Symphony]... the Crescendo of the recurring theme of invasion, startling development, exquisite pianissimo in the first part, some little sarcastic tones in the Moderato, the integrity of the musical phrasing by the strings, the ultimate sharpness of the Adagio and the vivid resolution in the Finale literally chained us to our seats.” (Beckmesser, 2016). "This is a unique orchestra with a special, ‘Leningrad’ sound...” (Codalario, 2016).

Just during the 2016/2017 season, the orchestra’s busy touring activities included concerts at the Théâtre des Champs-Élysées and Concertgebouw, Carnegie Hall and Musikverein, the Kennedy Center and the San Carlo Theatre, the Berlin, Munich and Hamburg Philharmonics, the Dublin Concert Hall and the Royal Festival Hall in London, Brucknerhaus in Linz, the City Hall of Leeds and the Grand Hall of the Moscow Conservatory. The orchestra took part in such festivals as: “Stars at Lake Baikal” in Irkutsk, the VIII Mstislav Rostropovich International Festival in Moscow and the IX Mstislav Rostropovich International Festival in Baku, the summer festivals in Ravenna and Ljubljana, the music festivals “Schleswig-Holstein” and “Grafenegg”. During this season, the orchestra has planned tours in Germany, Austria, Italy, Spain and France.

The orchestra’s St Petersburg poster shows there is an evening dedicated to Rodion Shchedrin, commemorating the composer’s 85th anniversary and monographic concerts with the music of Shostakovich and Beethoven, Verdi’s Requiem for soloists, choir and orchestra and violin concertos by Sibelius and Tchaikovsky, Hindemith’s symphony “Mathis der Maler” and Respighi’s “Vetrate di chiesa” (within the framework of the joint cycle of the Grand Hall of the Philharmonia and the State Hermitage), rarely performed Prokofiev’s cantatas “To the 20th Anniversary of October” and “Seven of Them”, as well as Janáček’s “Glagolitic Mass”, Webern’s Six Pieces for Orchestra and “Conditionally Killed” by Shostakovich.