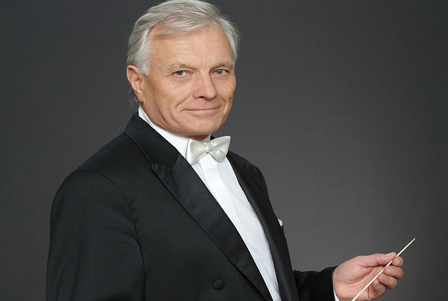 Trying to describe the essence of music and it’s significance in my life, I probably could not do it more precisely and felicitously than the Lithuanian composer and painter M. K. Čiurlionis has done: “Music is a messenger of God that has been sent to stir the most gentle and the best cords of our soul”. Music heightens the spirit and makes it nobler, encourages it to unfold and releases the creative energy. Why have I chosen the music to be the substance and the form of my life? It is the point. Life without music is just silence and emptiness.

While studying at the Lithuanian Music and Theatre Academy, P. Bingelis started working as the choirmaster of the male choir “Varpas” and the player and conductor’s assistant in the state brass band “Trimitas”. In 1969 he graduated from the academy obtaining the conductor’s diploma and formed Kaunas State Choir that he is leading until now. In 1975-1976 he improved his professional skills at Felix Mendelssohn-Bartholdy High Music School in Leipzig, in the choral conducting classes of professors Rolf Reuter and Kurt Masur.

Since 1970 P. Bingelis is the chief conductor and art director of the Lithuanian Song Festivals, included into the UNESCO Intangible heritage list, chairman and member of juries during choirs’ competitions. In 1977-1979 he founded the chamber orchestra of Kaunas and became it’s leader. In 1988-1989 he worked as the chief conductor of Kaunas State Musical Theatre. P. Bingelis is a professor at Vytautas Magnus University Music Academy. He is also the founder and art director of Pažaislis Music Festival.

In recent years P. Bingelis together with the Lithuanian Chamber Orchestra introduced to the public “Paukenmesse” by J. Haydn, “Dzūkian variations” by B. Kutavičius, with the Lithuanian State Symphony Orchestra – “Stabat Mater” by K. Szymanowski and the most famous fragments of classical operas, with Kaunas City Symphony Orchestra – “Requiem” by W. A. Mozart, “Le Déluge” by C. Saint-Saëns, “Stabat Mater” by K. Jenkins, “Symphony of Proverbs” by J. Juzeliūnas, “Requiem” by Č. Sasnauskas and numerous other pieces.

He has conducted the Odessa Philharmonic Symphony Orchestra and the staging of “La Traviata” by G. Verdi and “Don Giovanni” by W. A. Mozart at Kaunas State Musical Theatre.

The most characteristic traits of P. Bingelis as the conductor were and still remain energy, play of its push and tempering, resolution to advance and to take risks even in the most complicated moments. The conductor creates impressive choral art that proclaims life and optimism.

The creative activity of P. Bingelis has earned the highest estimations. In 1993 the conductor was granted the Lithuanian National Culture and Art Prize, in 1994 he was awarded with the 4th grade order of Grand Duke of Lithuania Gediminas, in 2003 – with the Commandor’s Grand Cross of the order “For the merits to Lithuania”, in 2008 he was elected the Honour Citizen of Kaunas City. In 2013 the Lithuanian Ministry of Culture handed in the sign of honour “Bring light and believe” to P. Bingelis.