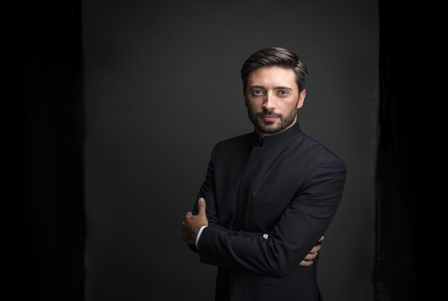 The spanish conductor Antonio Méndez is fast becoming one of the most exciting established and sought-after conductors having created strong links with the most important orchestras in Europe. From 2018/2019 onwards, he will become Music Director of Tenerife Symphony Orchestra.

Over the last few years, Antonio has already had great success conducting orchestras such as Tonhalle-Orchester Zürich, Symphonieorchester des Bayerischen Rundfunks, Mahler Chamber Orchestra, Rotterdam Philharmonic, Danish National Symphony, hr-Sinfonieorchester and Orchestre Philharmonique du Luxembourg. Since his debut with the Spanish National Orchestra in 2014, he has been conducting the orchestra every year including a tour in Japan and Korea. Additionally he also conducts Orquesta Sinfónica de Castilla y León and Sinfónica de Galicia in Spain.

In 2018/2019, he will open the season in Tenerife and will have his debut at Berlin Konzerthaus Orchestra, KBS Orchestra in Seoul and Orchestre de Chambre de Paris as well as returns to Iceland Symphony, Spanish National, Bournemouth Symphony Orchestras and Kammerakademie Postdam, amongst others. He will also have his opera debut in Spain with two productions of Puccini’s “Madame Butterfly” and Strauss’ “Ariadne auf Naxos”.

Last season, Antonio returned to the Wiener Symphoniker (at Bregenz Festival), toured with Staatskapelle Weimar in Spain and had his debut with Deutsches Symphonie-Orchester Berlin, Tchaikovsky Orchestra of the Moscow Radio (in the closing concert of Rostropovich Festival), Orchestra del Teatro Comunale di Bologna and returns to Seoul Philharmonic and Spanish National.

Antonio’s recent recording with the Radio-Sinfonieorchester Stuttgart des SWR, on SWR Music (for Berlin Classics) has been recently awarded with an Echo Klassik Award. He has also recorded with the Scottish Chamber Orchestra for Linn Records.

He attracted international attention as a prize winner at the prestigious 2012 Malko Competition in Copenhagen, and later as a finalist at the 2013 Nestlé and Salzburg Festival Young Conductors Award.

Born in 1984 in Palma de Mallorca, Antonio began his musical studies at the Conservatori Professional de Música de Mallorca in piano and violin. He also attended the Real Conservatorio Superior de Música de Madrid to study composition and conducting. Since 2007 he has been living in Germany, where he completed his conductor training at the Universität der Künste Berlin with Professor Lutz Köhler, also as a member of the Dirigentenforum (‘Conductor’s Forum’ from the German Music Council) and at the Hochschule für Musik ‘Franz Liszt’ Weimar with Professor Nicolás Pasquet.