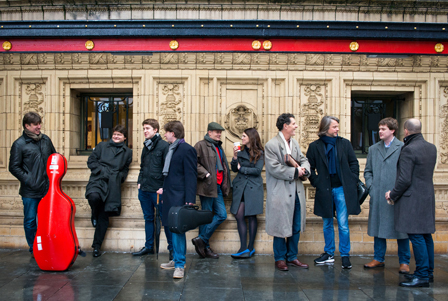 “The London Supergroup…playing with panache, wit and discreet sensitivity in performances that are a constant joy” Gramophone

London Conchord Ensemble is one of Europe’s leading chamber ensembles. Their imaginative programming and charismatic performance style have won them many accolades over the years, and they celebrated their 10th anniversary with a BBC Chamber Music Prom at Cadogan Hall. The group has made frequent broadcasts on BBC Radio 3 and American National Public Radio. Highlights of recent seasons include performances at the Amsterdam Concertgebouw, Wigmore Hall, Dusseldorf Tonhalle, Brussels Palais des Beaux Arts, Library of Congress in Washington D.C., and tours of Germany, France, America and New Zealand.

One of Conchord's strong interests is setting chamber music within a larger artistic context and its project 'The Rhythm of Silence' combines the writing of Virgina Woolf with Britten's Phantasy Op. 2 in a striking performance piece. The work which received 5-Star reviews is a co-commission of Rathfinny Vineyard and the Charleston Literary Festival and was premiered at Charleston with Juliet Stevenson in the role of Virginia Woolf.

Since its foundation the London Conchord Ensemble has been ensemble-in-residence at Champs Hill, Sussex, where the group has recorded much of its discography. Their double disc sets of from Vienna, Bach, and the complete chamber works of Francis Poulenc have been released to great critical acclaim.They have also recorded on the Sanctuary Classics/ASV, Black Box and Quartz labels.