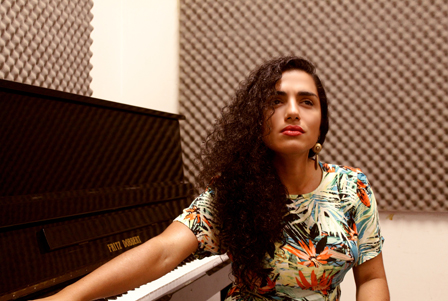 Maria Juliana Linhares is a singer and singing professor. Currently working as a substitute teacher of Music Education Department of the Federal University of Paraíba - Brazil, it is the institution where also she did a master's degree in ethnomusicology area (2013/2014). She has experience in popular song, and she has an original work titled "Vocals Petals". Her first award in Brazilian popular music was MPB/SESC Festival 2006, winning as new artist prize in the city João Pessoa. Since then, besides her solo career, she has been involved in many performance groups on Brazilian popular music, latin music and flamenco music. These are the festivals and popular music festivals which she participated in Brazil: Musical Farm, Week in Music Performance, Music Festival Paraíba, Northeast Station, Folia Street, Six and Half Project, St. John of the People, Cold Roads, Gloria Vasconcelos, MPB / SESC 2006 and 2008, Mrs. Bossa, World Music, das Neves Party, staged Poetry SESC / PB and Circuit Squares. He has been a vocal coach of theatrical performances especially by the Theatre Group and Crop Group Grease Theatre.

As opera singer worked with orchestras and chamber groups Brazil, especially with early music ensembles. Won honorable mention as a soloist revelation at the 13th Festival and Exhibition Maranhense of Lyrical Singing (Maracanto). With the Youth Symphony Orchestra of Paraiba participated in the concert "Invocation in Homeland Defense" (2005) by Heitor Villa-Lobos and "Choral Fantasy of Beethoven" (2006). Soloist Coral University of Paraíba (2005-2008). With the Chamber Orchestra of the City of João Pessoa, sang "Songs of the Nativity" (2007) and "Mozart Festival" (2008). Sang as a soloist with the Paraiba Symphony Orchestra at the National Art Festival (2008). Participated in the “Camena Group” (2010). Was soloist of contemporary music shows "Gross Cantata" (2011) and "I-Augustus" (2012). She is frequently invited as a soloist by the groups: Guitar Orchestra of Paraiba, Arts Woman Camerata and Symphonic Band 5 August. Currently she has participated are the Iamaká Group of Renaissance and Contemporary Music, Mosayco Group Flamenco Music, and the Iakekan Group Music of the Peoples of Latin America.