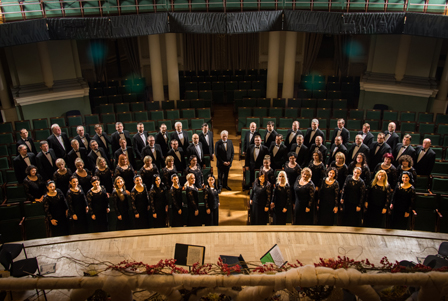 The Kaunas State Choir – one of the most prominent prestigious and representative Lithuanian collectives – has been in existence for about five decades. It has been led by Petras Bingelis – the initiator of the choir’s coming into the world, the winner of the Lithuanian National Culture and Art Award, and the Professor of the Vytautas Magnus University Music Academy – since the formation of the collective up to now. The volume of the choir repertoire with a distinct sound quality and a particularly wide dynamic range is approaching the scores of large volumes of vocal-instrumental works belonging to two hundred world music classics treasures. Having started the activity in the concert halls of the country and in the prestigious areas of the former Soviet Union, the collective shortly gained international recognition. The concert activity became especially active when the choir started collaborating with legendary conductor and violinist Lord Yehudi Menuhin. The media of the world culture then started announcing the Kaunas State Choir as the greatest musical discovery. The productive period of close collaboration with conductor Justus Frantz, tours in European countries, friendship with Mstislav Rostropovich, composer Krzysztof Penderecki and other celebrities of the world of music followed continuing up to this day. The number of performances of the collective has already exceeded three thousand – more than 75,000 listeners listened to Carl Orff’s cantata “Carmina Burana” in the stadium of Berlin, George Friedrich Handel’s oratorio “Messiah” has been performed for more than 80 times, the choir participated in the production of Giacomo Puccini’s opera “Tosca” during the stay in Macao (China) and they are invited to participate in the opera staging projects of “Vilnius City Opera”. Due to the high choral mastery and the ability to perform the most complex works, the Kaunas State Choir’s tours abroad are intensive. The professional collective’s attitude to work leaves the biggest impressions on partners, therefore, the offers to collaborate are received repeatedly. The choir is a regular participant in events dedicated to the State celebrations and festive occasions, and the listeners listening to the Lithuanian Radio start every morning with the broadcasted National Anthem performed by the choir.