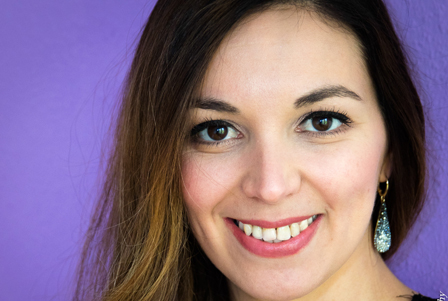 Born in Las Palmas de Gran Canaria, Elisandra Melián began her musical studies at the Conservatorio Superior de Música of Gran Canaria with her first singing teacher Leopoldo Rojas, then at the Escuela Superior de Canto in Madrid with the soprano Ana Fernaud, obtaining the prize "Lola Rodrígez de Aragón" and later on a Master in the Hochschule für Musik of Freiburg (Germany), with the soprano Dorothea Wirtz.

She won several awards in distinctive international singing competitions. She began her professional career in 2008 premièring her first opera with the role of Sandrine (L'Infedeltá Delusa, Haydn) beside the orchestra "Le Cercle de l'Harmonie" and the Academy of the Festival d'Aix-en-Provence. Since then she has sung the roles of Musetta (La Bohème) in Como, Brescia, Cremona, Pavia, Pforzheim, Koblenz; Barbarina (Le Nozze di Figaro) at the Campoamor Theater in Oviedo and at the Théâtre du Capitol in Toulouse; Sofia (Il Signor Bruschino) at the National Theater of Panama; Fanny (La cambiale di Matrimonio) in a tour of Europe with the Baroque Academy of Ambronay and the Festival of Aix en Provence, as well as the Royal Opera of Versailles; during the 44th, 45th, 49th seasons of the Las Palmas Opera Festival, debuting the roles of Frasquita (Carmen), Blonde (The Abduction from the Seraglio) and Aurore (Le portrai de Manon) respectively; again Frasquita (Carmen) at the StadtTheater in Freiburg and Winthertur (Switzerland); Offline of the operetta "Die Prinzessin von Trapezunt" at the Theater Baden Baden. Susanna (Les nozze di Figaro, Mozart), Gretel (Hansel and Gretel, Humperdinck), Maria (from the musical West Side Story and Conegonde (Candide), Queen of the Night and Papagena from the opera Mozart's Magic Flute, Rosina in The Rossini's Barber of Seville. In May of 2017 she debuted the most important and special role so far in her career, Rigoletto’s Gilda on the 50th anniversary of the Las Palmas Opera Season together with the renowned baritone Leo Nucci. In December 2014 she premiered in the genre of zarzuela performing Francisquita in her homonymous "Doña Francisquita" at the Théâtre du Capitol in Toulouse and last June she was invited to represent  the character of Rosilla of the zarzuela "La zarzuela" “Daughter of the mestre "of the canarian composer of the 20th century Santiago Tejera Ossavarry in the Pérez Galdós Theater, as well as the role of Woglinde, in the Wagner's Gold of the Rhine and Adina of Donizetti’s Elisir d'amore.

She has sung with prestigious conductors such as Jérémie Rhorer, Leonardo García Alarcón, Ivan Fischer, Michel Corboz, Attilio Cremonesi, Alain Guingal, Adrian Leaper, Alessandro Vitiello, Josep Caballé Domenech, Damian Iorio, Ramón Tebar, Gerhard Markson, Markus Huber, etc. and has had the opportunity to work with various stage directors such as Emilio Sagi, Mario Pontiggia, Guy Joosten, Magdalena Fuchsberger, Stephan Grögler, Iván Stefanutti, Curro Cárreres, Alfonso Romero. Simultaneously, Elisandra Melián performs a concert activity performing: the Mahler’ 4th Symphony in the National Auditorium of Madrid, recently the Mahler 2nd Symphony with the Philharmonic Orchestra of Gran Canaria and under the direction of the Chief conductor Karel Mark Chichon; Stabat Mater de Poulenc in the National Auditorium of Madrid, Haydn’s The Creation, Stabat Mater by Pergolesi, Mozart’s Requiem, Kaffee Kantate, Hochzeit Kantate and Bach’s Magnificat. Since September 2016, she has been part of the stable company of the Stadtheater Pforzheim in Germany. Among her future projects we highlight the debut as Leila in Bizet’s The pearl fishers for February 2019, in the Stadtheater Pforzheim.