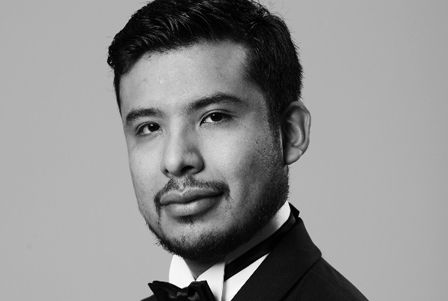 Bolivian bassist José Coca Loza studied singing with Katia Escalera in his home country, with Charles Roe at the University of Arizona and with Marcel Boone at the Basel Academy of Music. Since 2014 she has attended master classes with Silvana Bazzoni Bartoli and has won prizes such as the "Tucson Quest for the Best Singing Competition", the Hallwyl Castle Opera Competition (2014), the Renata Tebaldi Competition and the Migros Culture Percentage Singing Competition (2017).

Already in 2013 he was singing Sparafucile (Rigoletto) in Haldenstein and in the Zurich Tonhalle. In 2015, he sang El Campesino in La Dame blanche by Boieldieu in Rigiblick (Zürich) and also appeared in the final concert offered by the Vocal Academy of the Menuhin Festival in Gstaad and the Christmas Gala of the Tirol Festival in Erl, with the Mº Gustav Kuhn. Since 2016, José Coca Loza is a member of the Basel Theater, performing roles such as: the thief (Der Teufel mit den drei goldenen Haaren), Ca-pulet and Benvolio (Romeo und Julia, by Boris Blacher) and the bass soloist in Melancholia, production with music by Dowland, Monteverdi and other composers directed by An-drea Marcon.

In the 2017/18 season he sang Melisso (Alcina) with La Cetra Baroque Orchestra and Mº Andrea Marcon, Marchese d'Obigny (La traviata), Old Servant (Elektra) and Wilhelm Legrand at the world premiere of Der Goldkäfer by Dai Fujikura with the Mº Stephen Delaney. In addition, she appeared with Cecilia Bartoli at the Festival Stars & Rising Stars 2017 in Munich.

In June 2018, after his debut at the Salzburg Festival as Haly at L'Italia in Algeri, José Coca Loza will appear in the same role at the Royal Opera of Versailles, under Jean-Christophe Spinosi. Plans for 2018/19 include Alidoro (La Cenerentola) on tour with Cecilia Bartoli, Clistene in L'Olimpiade de Vivaldi at the Concertgebow in Amsterdam and concerts with the Ensemble Musica Fiorita with Daniela Dolci.