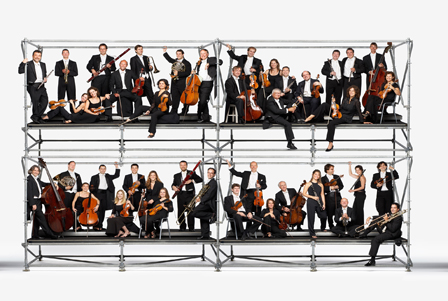 The orchestra was formed in 1988 from a group of young Spanish musicians and from other European countries who had clear objectives as orchestral formation: working closely with alive contemporary composers, recovering a legacy of Spanish music that had been unjustly forgotten and promoting the career of soloists, composers and emerging conductors.

Of Mediterranean origin but with a clear cosmopolitan vision, it was quickly recognized in the musical field for the quality and commitment of its musicians and the dynamism of its projects. Conductors like Sir Neville Marriner, Gennady Rozhdestvensky or Philippe Entremont sponsored the project and became the main guests, as did Alicia de Larrocha, Victoria de los Angeles, Teresa Berganza, Paco de Lucía, Ainhoa Arteta, Jonas Kaufmann, Olga Borodina, Pablo Sainz Villegas, Khatia Buniatishvili and Juan Diego Flórez, among others.

In 1992 the orchestra promoted the International Conducting Contest, a biennial contest that - with the support of other Spanish symphony orchestras - opens the professional market to young conductors from all over the world. Pablo González, Gianandrea Noseda, Vasily Petrenko and Michał Nesterowicz have been some of the winning conductors who now occupy a prominent position in renowned orchestras. Since 1998, Gianandrea Noseda is its principal director, and Jaime Martín, one of the founding musicians of the orchestra and first flute for twenty years, has been the Chief Conductor since 2011.

In order to promote and spread contemporary music, the Ensemble Orchestra of Cadaqués and the concept of the resident composer were created, premiering works by Xavier Montsalvatge, Jesús Rueda, Hèctor Parra, Jesús Torres, Luis de Pablo and Joan Guinjoan, among others.

The Ensemble has released several recordings with his principal conductors, Sir Neville Marriner, Gianandrea Noseda and Jaime Martín, edited by Tritó and Philips, and has created the classic music collection for children: "Solfa la redonda".

Recently, the orchestra has performed at the Philharmonie in Eindhoven, and has opened the Bremen Music Festival with three concerts; among his upcoming engagements it has three concerts at the Groβes Festpielhaus in Salzburg in October 2017 opening the Festival; a tour with Ashkenazy in May 2018; the return to Austria and Slovakia in 2019; the performance in the Philharmonie of Luxembourg and in the Stresa Festival, among others.