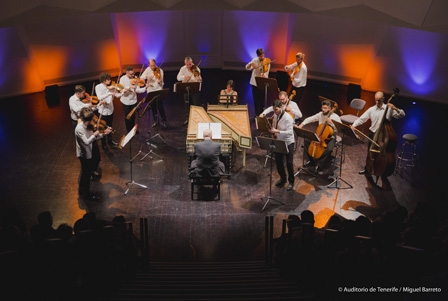 Heir of the remarkable degree of maturity attained by Spanish early music and as a result of the rise and quality of the groups performing in historical styles on original instruments, the Baroque Orchestra of Tenerife (OBdT) was formed in 2017. The echoes of the Baroque, from Monteverdi to Bach, could have no better place for resonance than that of the Hesperides.

The OBdT forms part of the cultural expansion plan initiated by the Island Cabildo, in the form of the Tenerife 2030 programme, and as a resident orchestra of the Tenerife Auditorium, the Baroque Orchestra of Tenerife was founded by ANDMÚSICA, the Association for the Normalization of Early Music in the Canary Islands, to encourage our young performers educated in Europe in the styles and instruments of the period, providing the appropriate platform to coordinate and promote historical musical heritage from different sound perspectives, bringing all the musical forms of the seventeenth and eighteenth centuries to new audiences, and adding value to the Island´s cultural offering and agenda.

An attractive cast of performers has been joined, from the start, by the experienced leadership of invited maestros, including Jacques Ogg, Bruno Procopio and Raúl Moncada, as well as the more recently raised batons of Alfonso Sebastián and Juan de La Rubia, giving life to past repertoire, applying musicological research and updating acoustic propositions with a clear desire for training and education, awakening cultural hopes never before advanced in our region.