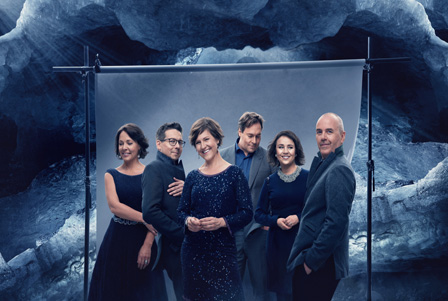 Nordic Voices is a 6-voice a cappella vocal group from Oslo, Norway. Throughout its 20 years of history, they have been gaining a reputation and recognition as one of the best vocal groups in the world of its kind. Members of Nordic Voices are graduates of the Norwegian Academy of Music or the Oslo Opera Academy. Together they share a long experience in opera, composition, sacred music and direction. They interpret repertoires ranging from medieval music to contemporary music, exploring broad specters of musical expression, from the plain chant to premieres of works that make up them by order. Nordic Voices has recorded 4 albums, the last one under the title "Lamentations" recorded for the British label Chandos. His two previous recordings "Reges Terrae" (Chandos 2007) and "Djånki-Don" (Aurora 2008), in both cases, received a nomination for the Spelleman awards of the record industry of Norway. In 2008, Nordic Voices received the Farben Valen Award for their contribution to contemporary Norwegian music. Nordic Voices, since its founding, has offered concerts throughout Europe, the United States or China

Tone E. Braaten graduated from the Norwegian Academy of Music in Oslo in 1996 and is a founding member of Nordic Voices. In addition to singing at Nordic Voices, she is a singer very popular both by Norwegian groups and by foreign groups, being habitual its presence in programs of radio and television. He has also participated in many solo recordings.

Ingrid Hanken, studied music and singing pedagogy at the State Academy of Music. She is a singer with long experience, who began her career as a child as a singer. He is a member of many choirs and ensembles from Norway and abroad, including The Norwegian Soloist Choir, St. Olaf Chori and the Oslo Bach Ensemble. Ingrid is a great expert in the field of vocal training, having also worked specifically in the field of vocal training for children. She is also a teacher of musical theater, ensembles and vocal training at the Baardar Academy, an art school in Oslo. He has been a member of Nordic Voices since 1996.

Swedish mezzo soprano Ebba Rydh studied singing at Kulturama, and at the Stockholm Opera Studio, being a musicologist at the University of Uppsala. In 2003 she graduated from the Oslo Opera Academy in Norway. He usually resides in Oslo, offering numerous concerts in Norway and abroad as a soloist in groups of Renaissance, Baroque and contemporary music.

He studied at the National Academy of Music in Oslo. He graduated in 1985 in Candidata Magisterii. Subsequently, in 1996, he graduated as a choir director. Per Kristian has a vast experience as a choir director as well as a teacher of singers and vocal ensembles, often being invited by many choirs to offer master choir management classes as master singing lessons. He has been a member of Nordic Voices since its foundation in 1996.

He studied at the National Academy of Music and the National Opera Academy, both in Oslo. Since 1997 she works as a soloist. He has a very flexible voice, thus being able to sing different styles of music. He has performed concerts with most norwegian orchestras and offered concerts at most Norwegian festivals. He has recorded many records. Since 1997 he has been a member of Nordic Voices, with whom he has performed concerts all over the world. He also works as a composer, having premiered many choral works.

Rolf Magne Asser studied at the Norwegian Academy of Music singing and saxophone. He was a member of the male choir Gli Scapoli and is a member of the Quattro Stagioni vocal quartet. With both ensembles has traveled throughout Europe, USA and Japan, in different tours. Since 2004 he belongs to the National Opera Choir of Norway, having played some minor roles as a soloist. She has worked for many years as a singer with different ensembles and in different styles of music and many albums in which she has participated as a soloist and member of ensembles.