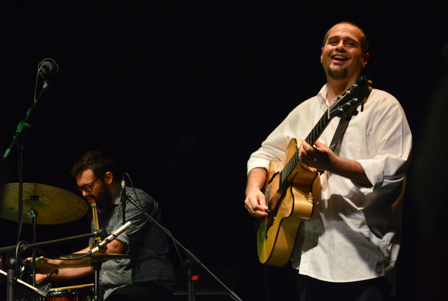 Principal Music Director of the Escuela Itinerante de Música (EiM). Venezuelan guitarist and composer. Through his music style he has been developing a very rhythmic, timbral and harmonic language. The myriad of influences expressed in Pedro Barboza’s playing, takes the listener through a journey of ethnic chants, Venezuelan rhythms, jazz and free improvisation as well as contemporary music.

His music has been played on stages around the world. He is considered one of the leaders of a new musical scene in Venezuela.

He obtains his Bachelor’s Music degree at the prestigious Berklee College of Music, in Boston (USA). His post gra­duate work was in composition and orchestration studies at the Rotterdam Conservatory. In 1998 he graduated with honors and obtained an M.A in Electroacoustic Composition at the Hertfordshire University in the UK.

Mr. Barboza received a scholarship from the Pho­nos Fundation in Barcelona, Spain. He continues his electroacoustic composition studies under the guidance of Gabriel Brncic and incorporates this training into the free improvisation language.

His music has been performed in Venezuela, the U.S.A, North and South America and Europe. After several years devoted to research and teaching, Mr. Barboza decides to opened the Escuela Itinerante de Música(EIM), for the purpose of supporting the comprehensive training of young musicians in Venezuela. In addition Mr. Barboza works as a teacher at the National Experimental University of Arts (UNEARTE).

Currently he is working in multidisciplinary projects and directs the Patchwork Ensemble where sound, movement, text and images are woven into a language of interdisciplinary creation.