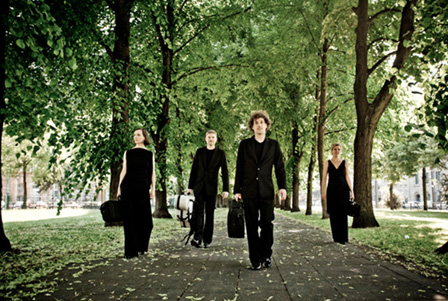 The young German ensemble was laureat at the Borciani, Hamburg and London competitions and is now member of the BBC 3 New Generation Artits Series.

The quartet recently played in Paris, Vienna, Cologne as well as at the Davos, Lofoten and WestCork Festival. It will now appear at Berlin Philharmonic (quartet series of the Berlin Philharmonic), Tonhalle Duesseldorf with Leon Fleisher, at London Wigmore Hall with the BBC, in Oslo, Frankfurt, in Santa Fe as well as in Boston (Harvard Music Association). Partners will be again Joerg Widmann and Alfred Brendel.

Thanks to its rousing and lively interpretations, the Signum Quartet has left its mark on the international quartet scene (Signum is Latin for mark, signal, miraculous works) and has established itself as one of the most interesting new ensembles. Founded in 1994, the ensemble has been playing with the current line-up since 2007. The quartet has enjoyed support from Bayer Kultur as part of its stART cultural programme and the BBC has also included the ensemble in its BBC Radio 3 New Generation Artists scheme.