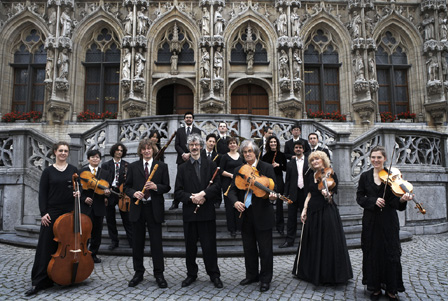 La Petite Bande (Belgium) was founded in 1972 by Sigiswald Kuijken at the request of the record company Harmonia Mundi (Germany) in order to record Lully's "Le Bourgeois Gentilhomme", under the direction of Gustav Leonhardt. The orchestra takes its name and constitution from Lully's own orchestra at the court of Louis XIV. All its members are internationally renowned specialists in the early music field.

Although originally La Petite Bande was not meant to become a permanent orchestra, the success of the recordings was such that they began to give concerts regularly. Having initially concentrated mainly on French music, the orchestra's repertoire has expanded over the years to include music by the Italian masters and that of Bach, Handel, Gluck, Haydn, Mozart and others.

The 18-part CD series "Cantatas of J.S. Bach" (ACCENT) is complete since February 2014. Sigiswald Kuijken applies the latest findings in Bach research: no choir, but rather a vocal quartet together with a minimal instrumental scoring. In this way, the fine musical texture of these cantatas can be much better (and more naturally) revealed.

La Petite Bande has performed in a multitude of international festivals and concert series, in Europe, Japan, Australia, South America and China.

Since 1997, La Petite Bande has been in residence in the City of Leuven.