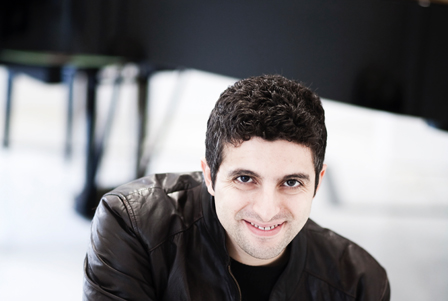 "The young Spanish pianist Javier Negrín is a trustworthy guide to these pieces, if not an outstanding one. Everything about his playing is poised and beautifully proportioned; textures are luminously clear, and he copes with Scriabin's subtle shifts of emphasis and texture very skilfully."

"He understands Scriabin's tiny statements (the beautifully fluent 51-second Op. 15 No 2) and he also appreciates the importance of beauty of sound, as in the tiny droplets in the treble of Op. 16 No. 1. This is an important disc from a talented young pianist."

Javier Negrín made his solo debut at the Wigmore Hall in London in 2004 performing works by Ravel and Jindřich Feld, and since then has enjoyed a very distinguished career, performing as a soloist and chamber musician in important venues in Europe, South America and the Far East.

A major prizewinner at the Royal College of Music of London, where he also held a Junior Fellowship, Javier has been the recipient of many awards in his career, including the prizes for the best interpretations on Schumann, Chopin, Brahms, Ravel and virtuoso studies. His main influences were the late Yonty Solomon - himself a pupil of Myra Hess-, Armando Alfonso -son of the famous Spanish pianist Javier Alfonso-, and most recently Howard Shelley and Joaquín Achúcarro.

In the last two years he has performed in China, Japon, the Czech Republic, Italy, Portugal, and in Madrid in Auditorio Nacional and Teatro Real. He has been one of the nine Spanish pianists chosen by the Centro Nacional de Difusión Musical to perform the entire Beethoven´s sonata cycle, and he collaborates actively with the Quantum Ensemble (ensemble in residence in Auditorio de Tenerife) and Neopercusion.

Javier has recorded for three different labels:  a CD for clarinet and piano with music by Lutoslawski, Nielsen, Poulenc and Debussy for the English label Linn Records and for the American labels Navona Records and Odradek Records, featuring works by the contemporary composer Lawrence Ball and Scriabin´s early Travel Preludes which has received excellent critics worldwide. His next CD release with Spanish music by Granados (Goyescas) and Mompou (Variations sur un thème de Chopin) is due in January 2016, again with Odradek.