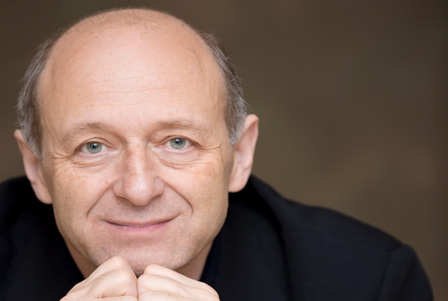 Iván Fischer is the Music Director and a founder of the Budapest Festival Orchestra, while also fulfilling the role of Music Director at Berlin’s Konzerthaus and Konzerthausorchester. Recently he has seen his reputation rising as a composer too, with his works being performed in the United States, the Netherlands, Belgium, Hungary, Germany, and Austria. He has also directed a number of successful opera productions.

His thirty-year-long partnership with the Budapest Festival Orchestra is one of the greatest success stories on the classical music scene. The BFO’s frequent worldwide tours as well as a series of critically-acclaimed and fast-selling records, released first by Philips Classics and later by Channel Classics, have contributed to Iván Fischer’s reputation as one of the world’s most successful orchestral directors.

As a guest conductor, he has worked with the finest symphony orchestras in the world. The Berlin Philharmonic has played more than ten times under Fischer’s baton, and he spends two weeks every year with the Amsterdam’s Royal Concertgebouw Orchestra. He is also a frequent guest of the leading US symphony orchestras, including the New York Philharmonic and the Cleveland Orchestras.

As Music Director, he has led the Kent Opera and the Opéra National de Lyon, and was Principal Conductor of the National Symphony Orchestra in Washington DC. Many of his recordings have been awarded prestigious international prizes.

He studied piano, violin, and later the cello and composition in Budapest, before continuing his education in Vienna where he studied conducting under Hans Swarowsky.

Iván Fischer is a founder of the Hungarian Mahler Society and Patron of the British Kodály Academy. He has received the Golden Medal Award from the President of the Republic of Hungary, and the Crystal Award from the World Economic Forum for his services in promoting international cultural relations. The government of the French Republic made him Chevalier des Arts et des Lettres. In 2006 he was honoured with the Kossuth Prize, Hungary’s most prestigious arts award, while in 2011 he received the Royal Philharmonic Society Music Award, Hungary’s Prima Primissima Prize and the Dutch Ovatie Prize. In 2013 he was given Honorary Membership to the Royal Academy of Music in London.