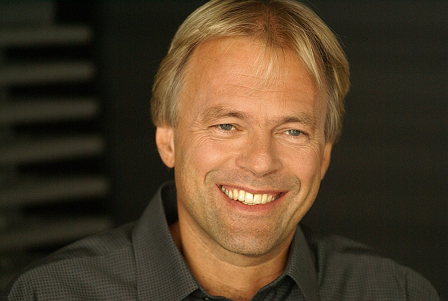 With his imagination, his musicological passion for discovery, and his uncompromising manner of music-making, Thomas Hengelbrock numbers among the most sought-after conductors of our time. Unconventional, surprising, and varied are the concert programs and opera projects that he has presented in the past two decades with his Balthasar-Neumann-Chor and Ensemble and, since 2011, as music director of the NDR Symphony Orchestra. In elaborate dramaturgies, he fuses Baroque with contemporary works, the familiar with forgotten masterpieces. Outside the established interpretational norms, he questions the operas and symphonies of the nineteenth century anew. In staged and cross-genre projects, he lets music, literature, theatrical performance, and dance flow into one another.

Thomas Hengelbrock is internationally respected as an opera and concert conductor. Guest appearances have taken him repeatedly to the Munich Philharmonic Orchestra, the Orchestre de Paris, and the Symphony Orchestra of the Bavarian Radio. He made his debut at the Bayreuth Festival in 2011 with Wagner’s Tannhäuser. The current season saw him for the first time on the rostrums of the Concertgebouw Orchestra Amsterdam and the Vienna Philharmonic. He appears regularly as a guest at the Teatro Real Madrid, the Opera de Paris, and Baden-Baden’s Festspielhaus.

With his Balthasar-Neumann-Ensembles, he caused a sensation in January 2013 with concert performances of Parsifal on period instruments. In collaboration with actress and narrator Johanna Wokalek, Thomas Hengelbrock has also prepared musical-literary programs such as the Night Watch with poetry and a cappella choral works of the Romantic era (recording for Sony Music, concert tour 2015) and, currently, a new production of Purcell’s Dido and Aeneas with recitation, which will be premiered at the Salzburg Festival 2015.

As music director of the NDR Symphony Orchestra, “he inspires Hamburg” and “entices more and more new miracles from the orchestra” (Hamburger Abendblatt). Four highly praised CD recordings with symphonies by Mahler, Dvořák, Mendelssohn, Schumann, and Schubert have been released. Concert tours with the orchestra have taken him through Germany, Europe, and Asia.

Formative influences on Thomas Hengelbrock’s artistic development were his activities as assistant to Antal Dorati, Witold Lutosławski, and Mauricio Kagel, which brought him into contact with contemporary music at an early stage. His work in Nikolaus Harnoncourt’s ensemble Concentus musicus also gave him decisive impulses. Besides his extensive involvement with the music of the nineteenth and twentieth centuries, he has devoted himself intensively to historically informed performance practice and contributed significantly to the enduring establishment of period-instrument performance in German concert life. In the 1990s, with the Balthasar-Neumann-Chor and Balthasar-Neumann-Ensemble, he founded ensembles that today number among the internationally most successful of their kind. Moreover, from 1995 to 1998 he was active as artistic director of the Deutsche Kammerphilharmonie Bremen, directed the Feldkirch Festival from 2000 to 2006, and worked as music director of Vienna’s Volksoper from 2000 to 2003.

Beside his position as music director of the NDR Symphony Orchestra, founder and music director of the Balthasar-Neumann-Ensembles he has been designated as “Chef associé” of the Orchestre de Paris. Having a close connection and friendship with this orchestra anyway, this new relationship will start with the season 2016/2017.

Thomas Hengelbrock is outstanding within other musicians in his educational work. He founded the Academy Balthasar Neumann, the NDR Youth Symphony Orchestra and works a lot with students as well as children’s choirs. He founded the Cuban-European Youth Academy, the first cultural exchange program for highly talented students from Cuba and Europa.

“Few other conductors publicly engage with the question of their responsibility as musicians today to the same degree as Thomas Hengelbrock does. In addressing this question, Hengelbrock extends the concept of musical education for the next generations to include training specifically aimed at young professional musicians.” (Board of Trustees of the Festspielhaus Baden-Baden Cultural Foundation)