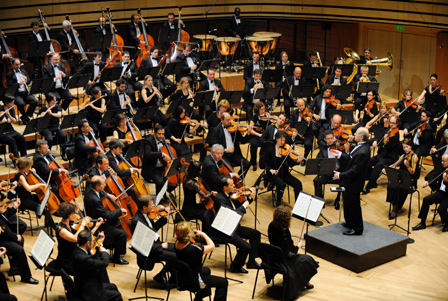 The Budapest Festival Orchestra is one of the Hungarian music scene’s major success stories, being rated among the top ten orchestras in the world. Its key figure is Music Director Iván Fischer who, alongside Zoltán Kocsis, was one of the Orchestra’s founding fathers. The BFO’s unique system works to encourage the artistic qualities of its musicians to blend together, forming an exquisitely homogenous orchestral sound. Both audience and critics alike acknowledge the quality in the ensemble’s captivating chamber music performances, as well as the all-pervasive dynamism with which it shares the joy of music-making with the audience.

Over the decades, the Festival Orchestra has presented the Hungarian audience with such stars as Sir Georg Solti – until his death he was the Principal Guest Conductor of the BFO, as well as great musicians such asYehudi Menuhin, Pinchas Zukerman, Gidon Kremer, Radu Lupu, Sándor Végh, Sir András Schiff and Richard Goode. Iván Fischer also makes great efforts to invite young, internationally-acclaimed musicians and singers to perform for domestic audiences.

The orchestra is a regular guest at the world’s most important music venues and concert halls, including Carnegie Hall and the Lincoln Center in New York, Vienna’s Musikverein, the Royal Concertgebouw in Amsterdam and London’s Royal Albert Hall. They have repeatedly been invited to perform at international music events such as the Mostly Mozart Festival, the Salzburger Festspiele or the Edinburgh International Festival.

The orchestra’s own Bridging Europe festival, focusing on the culture of a different nation every year, was launched in partnership with Budapest’s Palace of Arts – just like the famous Music Marathons which present the works of a single composer through a whole day. Opera performances, directed by Iván Fischer, are also staged as joint productions with the Palace of Arts; following on from the highly-acclaimed renditions of Don Giovanni and The Marriage of Figaro, they recently performed The Magic Flute.

In 2014, the orchestra dedicated itself to two Community Weeks of free concerts given in S.O.S. Children’s Villages, nursing homes, churches and synagogues, and these will continue into 2015. This summer will see the initiation of a further grand project when two hundred underprivileged youngsters will dance to the Festival Orchestra’s tune at the Open-air-Dance Concert in Budapest’s Heroes’ Square (Hősök tere).

The Festival Orchestra regularly plays to young audiences, including Cocoa Concerts for the youngest and ‘Choose Your Instrument’ programmes for primary school children. They hold frequent Film competitions for secondary school students, while making efforts to reach out to young adults too – not least through the highly successful Midnight Music series.

Over the years, the BFO has received the highest of accolades. In 2008, internationally-renowned music critics rated the orchestra the 9th best in the world, bettering such prestigious ensembles as the New York Philharmonic and the Boston Symphony Orchestra. In New York Magazine’s 2013 list of the city’s top classical music events, the BFO’s production of The Marriage of Figaro was voted the best of the year. The orchestra’s albums have twice won Gramophone Awards, the classical music equivalent of the Oscars, while their rendition of Mahler’s first Symphony was nominated for a 2013 Grammy. In 2014, the recording of Mahler’s Symphony No. 5 received wide acclaim, being awarded both the Diapason d’Or and Italy’s Toblacher Komponierhäuschen for Best Mahler Recording.