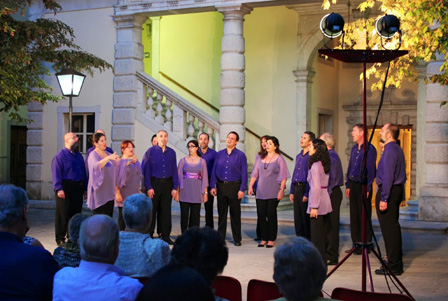 The Ainur Chamber Choir was originally founded in 1991, at a time when a main choral movement was taking place in the Canary Islands. The choir’s work was interrupted for several years during its members’ academic education, as well as during their participation in different musical projects. The present line-up has been steady since 2006. Their repertoire offers a variety of styles of great difficulty and chromatic richness, and tries to take advantage of the cultural and geographic circumstances of the Canaries.

A remarkable feature of the group is their willingness to innovate within the choral music. Their versatility and the variety of repertoire they face can be seen in the different projects they have taken part in. The successes in national competitions in which they has been selected have their summit with getting the National Grand Prix for Choral Singing in 2012 and two awards in their respective sections: Polyphony and Folklore. The valuations of the different juries have in common the elegance with which perform the different styles and vocal quality.

A few instances of the choir’s late activity are the following:

First Prize at the Lullabies and Carols National Contest in Rojales, Alicante, in December 2010.

Second Prize in Folk Category and Third Prize in Polyphony Category in A Capella Contest, Navarra, in March 2011

Won the National Grand Prix for Choral Singing, and both categories: Polyphony and Folk, in Santander, December 2012

Gold medal in the category Jazz and 4 silver medals in the International Competition Seghizzi (Gorizia - Italy), 5th place in the overall score.

The Ainur Chamber Choir has occasionally had the collaboration of guest conductors in order to face the different repertoires. Some of them are Elías Rodríguez, Ángel Camacho, Emilio Tabraue and Laura González Machín.

Mariola Rodríguez Suárez has been the choir's conductor ever since it was founded, back in 1991. She has a piano degree from the Conservatory of Las Palmas de Gran Canaria, and also a singing professional degree from the same institution.

In addition, she has a degree in History and Science of Music from the University of Salamanca. Her choral experience is vast; she has been part of numerous groups, both inside and outside the Canary Islands She has worked as assistant to many choir conductors, such as Laura González Machín, Juan José Falcón Sanabria, Emilio Tabraue El Jaber and Dante Andreo, just to name a few. She has specialized in early music from the hand of Isabel Azcune.

You can view more and updated information at: