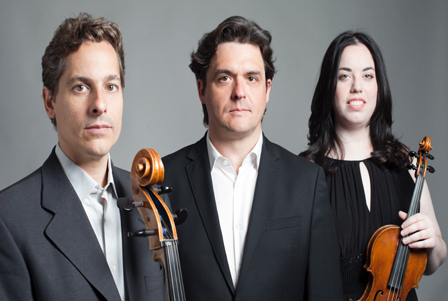 Awarded with Spain’s National Prize of Music, the trio is formed by the violinist Cecilia Bercovich, the cellist José Miguel Gómez, and the pianist Juan Carlos Garvayo. Founded in 1996 and named after the Spanish violinist, conductor and composer Enrique FernándezArbós (1863-1939), the Trio Arbós, based in Madrid, has established itself as one of Europe's leading chamber ensembles.

The repertoire of the trio ranges from the classical and romantic (complete trios by Mozart, Beethoven, Schubert, Mendelssohn, Schumann, etc.) to the contemporary, with specially commissioned works forming a significant part of the concert programs presented. Georges Aperghis, Toshio Hosokawa, Ivan Fedele,Mauricio Sotelo, Luis de Pablo,Jesús Torres,Hilda Paredes,Roberto Sierra, Bernhard Gander,Aureliano Cattaneo,César Camarero,José María Sánchez Verdú,José Luis Turina, etc. are some of the composers who have dedicated works to this prestigious ensemble. The trio has also collaborated closely with renowned composers such as Pascal Dusapin,Jonathan Harvey, Cristóbal Halffter, Salvatore Sciarrino and Beat Furrer among others.

The Trio Arbós has recorded the complete piano trios by Joaquín Turina and Roberto Sierra for NAXOS, music by Jesús Torres and César Camarero for KAIROS and a dozen other CDs for labels like COL LEGNO, VERSO or ENSAYO with music by Spanish and Latin American composers. The prestigious magazine Gramophone said of of their acclaimed CD “Play it again”: “ This disc reaffirms the credentials of Trio Arbós as among the most inclusive and forward-thinking of chamber ensembles.”

Since 2005 Trio Arbós holds a residence at the Reina Sofía Museum of Contemporary Art of Madrid.  Their project Triple Zone has been awarded by the Ernst von Siemens Musikstiftung.  In the upcoming years, the Trío Arbós will premiere new works for piano trio thanks to a program of sponsorship by the BBVA Foundation.