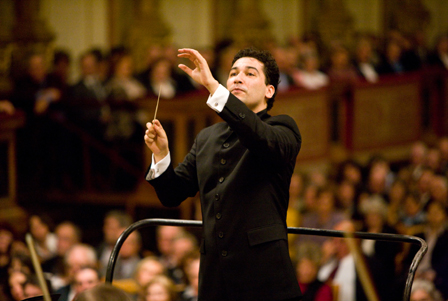 Andrés Orozco-Estrada, born in Colombia and trained in Vienna, is one of the most sought after conductors of his generation. From the beginning of the 2014/15 season, he will take up the positions of Music Director of the Houston Symphony and Chief Conductor of the Frankfurt Radio Symphony Orchestra. From September 2015 Andrés will also take up the position of Principal Guest Conductor with the London Philharmonic Orchestra.

Orozco-Estrada first came to international attention in 2004, when he took over a concert with the Tonkünstler Orchestra Niederösterreich at the Vienna Musikverein - celebrated by the Viennese press as a “wonder from Vienna”. Numerous engagements with many international orches¬tras followed and since then Orozco-Estrada has developed a highly successful musical partnership with the Tonkünstler Orchestra, one of the most important institutions of traditional Austrian musical culture. Since the beginning of the 2009/10 season, Orozco-Estrada has been the Music Director of the Tonkün¬stler Orchestra, a position that he will relinquish in the summer of 2015. This Orchestra holds subscription series at the Vienna Musikverein and is Orchestra-in-Residence at the Grafenegg Festival. Between 2009 and 2013 Orozco-Estrada was also Principal Conductor at the Orquesta Sinfónica de Euskadi (Basque National Orchestra).

Born in 1977 in Medellín (Colombia), Andrés Orozco-Estrada began his musical studies on the violin and had his first conducting lessons at the age of 15. In 1997, he moved to Vienna where he joined the con¬ducting class of Uroš Lajovic, pupil of the legendary Hans Swarowsky, at the renowned Vienna Music Academy and completed his degree with distinction by conducting the Vienna Radio Symphony Orchestra at the Vienna Musikverein. The emphasis of his artistic work lies in the Romantic repertoire and Viennese classics. At the same time, Orozco-Estrada shows a keen interest in contemporary music and regularly performs premieres of Austrian composers as well as compositions of Spanish and South American origin. Orozco-Estrada currently lives in Vienna.